AMD released its flagship GPU, the Radeon R9 295X2 codenamed Vesuvius around 2 weeks back. The card had beastly features and was the first reference model to feature a hybrid-cooling design referred to as project Hydra, which included a 120 mm radiator with two fans. Featuring two Hawaii-XT cores, the specifications of 5632 (2816 x 2) stream processors, 352 (176 x 2) Texture Mapping Units, 128 (64 x 2) ROPs coupled with a total 8 GB GDDR5 had the card all set to deliver unprecedented levels of gaming and graphics performance. Within two weeks the first factory overclocked model of the R9 295 X 2 has hit the market. Released by Sapphire and called the R9 295x2 OC, the overclocked GPU has some very interesting specifications. 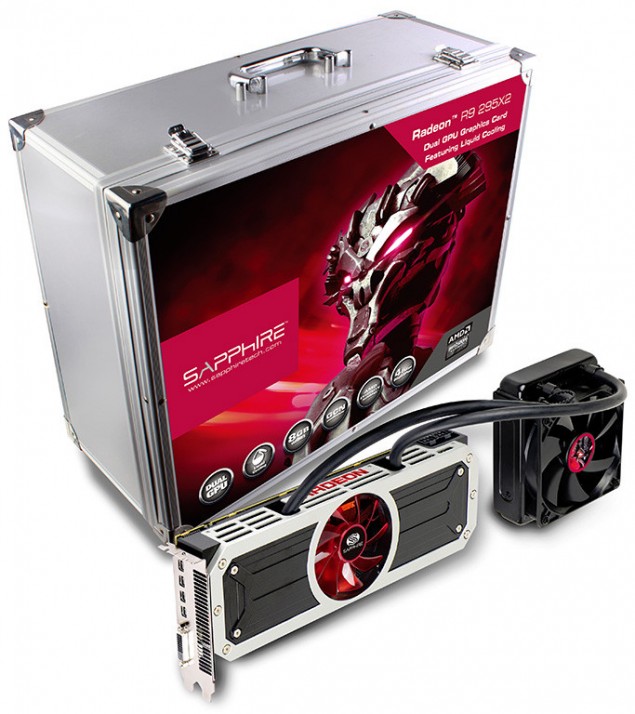 The R9 295X2 OC released by Sapphire has indeed managed to increase the GPU frequency of the reference model. The new model released will now be able to achieve shattering speeds of 1030 MHz. The reference model on the other hand, AMD's very own 'Vesuvius' could only achieve a mere 1018 MHz. This gives the new card an edge of 12 MHz over the reference model. It can also clearly be seen that in designing this card, Sapphire has kept in mind the principle of 'less is more', often found in minimalist traditions around the world. This edge of 12 MHz should result in an overall FPS boost of 0,05.

So for all the potential users of Vesuvius who feel their gaming experience will lack this very clear significant edge should seriously consider Sapphire's new model. The frequency is not the only thing increased however. The GDDR5 on the card has also been overclocked from 5 GHz to 5.20 GHz. All of this couples for a product which has clearly been designed to keep in the mind the principles of boundary pushing behind overclocking indeed.