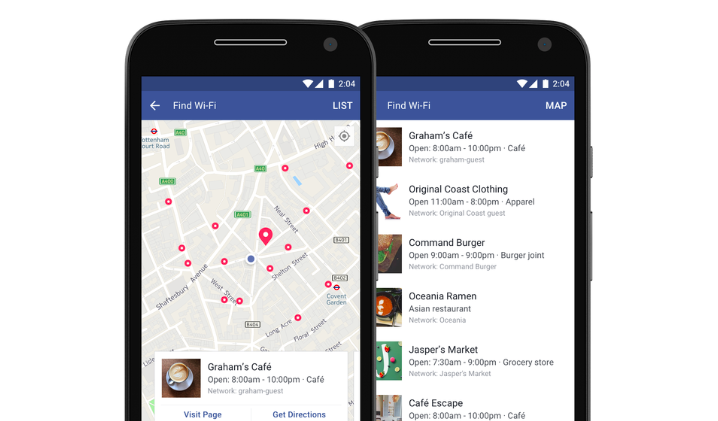 Facebook is rolling out one of its latest features globally. The company's "Find WiFi." feature is being rolled out all across the world.

The company started testing the “Find Wi-Fi” feature on mobile, last year. The option (when enabled) displays free public Wi-Fi networks nearby. Initially, the option was limited to iOS devices in select countries, but now Facebook has announced it for Android as well. It is starting to go live all around the world. Today, Facebook just announced the availability of the option.

The social media giant believes that the option would come handy when users are travelling. Facebook explains that it will be more useful for the areas with limited cellular connectivity. In the US, this would apply to remote rural areas, but for the developing countries, it should be of better use.

Available under the "More" tab in the Facebook mobile app

Users will be able to access the option from the "More" tab in the Facebook mobile app. Once enabled, Find WiFi will display open WiFi networks on a map.

Today we’re beginning to roll out Find Wi-Fi everywhere in the world on iPhone and Android. We launched Find Wi-Fi in a handful of countries last year and found it’s not only helpful for people who are travelling or on-the-go, but especially useful in areas where cellular data is scarce.

Find Wi-Fi helps you locate available Wi-Fi hot spots nearby that businesses have shared with Facebook from their Page. So wherever you are, you can easily map the closest connections when your data connection is weak.

The company also revealed that it now has 2 billion users on the platform, which means that the new Find WiFi option would now come up as more helpful for connecting the ever growing user base of Facebook. Not only users, but the tool would also help local businesses. Users may just start turning to Facebook for searching nearby outlets rather than Googe Maps.

As we mentioned above, the tool is beginning to roll out globally on iPhone and Android.