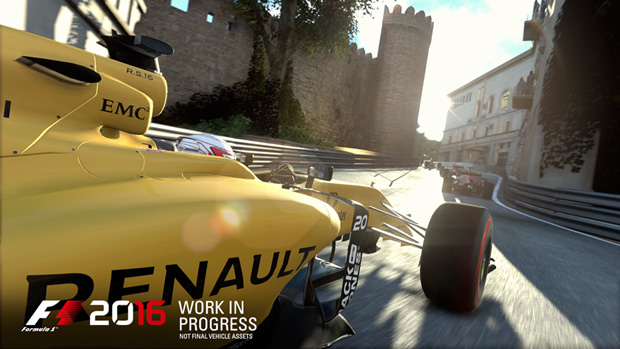 F1 2016, the new F1 officially licensed racing game currently in development by Codemasters, has been announced last month for consoles and PC with a generic Summer release date. Today, the publisher confirmed precisely when the game will be available for purchase in all regions.

F1 2016 will be released officially on PC, PlayStation 4 and Xbox One on August 19th 2016. From that day, players will be able to experience the all new features included in the game, such as the new Baku street circuit, the new career mode and more.

Talking about the new circuit, the first F1 2016 gameplay videos showcasing the Baku street circuit have emerged online. The first video gives players a tour of the circuit, while the other two show pro drivers Daniel Ricciardo and Jolyon Palmer race on the circuit in the game.

F1 2016 will set itself apart from the rest of the series with the new Career Mode, which will span 10 seasons, the re-introduction of the Safety Car and other yet to be announced details. The career mode promises to be quite interesting, with players having to oversee all aspects of a F1 career such as contacts, picking between teams and more.

Players can create an avatar within the career mode, select a number to take with them through their career, and then select which of the 11 teams - including newcomers Haas F1 Team - on the grid they will start their career with. They can then earn contracts and pick their moves between teams, or elect to stay at one in a bid to turn them into championship contenders.

FI 2016 launches on PC, PlayStation 4 and Xbox One this August. We will keep you updated on the matter as soon as more comes in on it, so stay tuned for all the latest news.