Additional Exynos 2200 details have been shared concerning the GPU. For those who have not been keeping up, Samsung reportedly plans on unveiling a new flagship smartphone SoC which will feature an AMD RDNA2 GPU for the first time. A tipster now claims that he has seen a structural diagram of the chipset and reveals that a 6-core GPU will be a part of it.

On Weibo, Ice Universe is back with more news revolving around Exynos 2200. Previously, he revealed both the chipset and GPU codenames, and now, he claims that Samsung’s upcoming flagship chipset will sport a 6-core GPU. In contrast, the Exynos 2100 features a 14-core Mali-G78 GPU so in core count, the ARM graphics processor is inferior right?

If you recall, the A14 Bionic only has a 4-core GPU and it is currently the fastest performer in the market at this time, so core count is irrelevant at this stage. Also, this 6-core AMD RDNA2 GPU was previously being tested and it beat the A14 Bionic, showing that we are likely in for a treat when it comes to graphics performance. On a side note, Snapdragon 888 obtained 50 percent less points than the Exynos 2200, so it means that Samsung’s Achilles’ Heel was sticking with ARM GPUs. 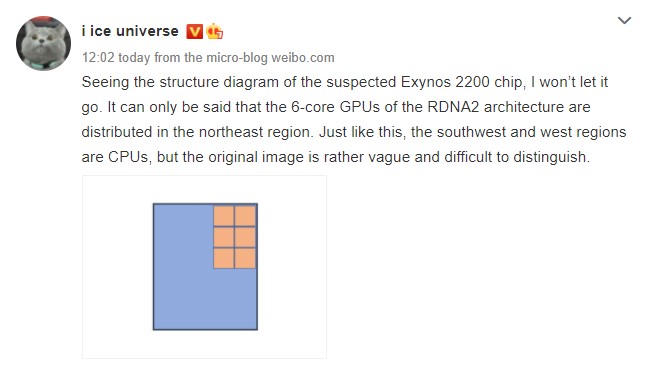 Qualcomm’s rumored Snapdragon 895 also seemingly has no chance against the Exynos 2200. Previously, the Exynos 2100 was keeping up with the Snapdragon 888, but it faltered in the GPU test, so perhaps this is Samsung’s shining moment to address problems that it was dealing with for significant years. Unfortunately, the Korean giant was rumored to make an announcement later this month, but so far, we have heard nothing from the firm.

There could be a surprise unveiling, if we are lucky, so we will keep our readers updated in the coming weeks, so stay tuned.