Wow, i must say this doesn't come as the least bit of surprise for me. After the launch of the AMD R9 290X  at GPU '14 and reports that the same is faster than the GTX Titan (though we are not so sure) it was expected of Nvidia to reply. And is this the answer? the full power of the GK110 Core finally unleashed?

The full blown GK110 Core optimized to gaming perfection is possible one of the most awaited chips of all time. Unlike the other current generation cores which suffer in Double Precision the GK110 core has the best of both worlds - heat output of current gen and double precision of Fermi. And of course not to mention that since the Titan is basically a slightly crippled Gk110 Core a full fledged GK110 core should return the figurative crown to Nvidia. It might be

The New Graphics Card is Expected to be Presented by Nvidia on the Montreal Event on 16th/17th of October. 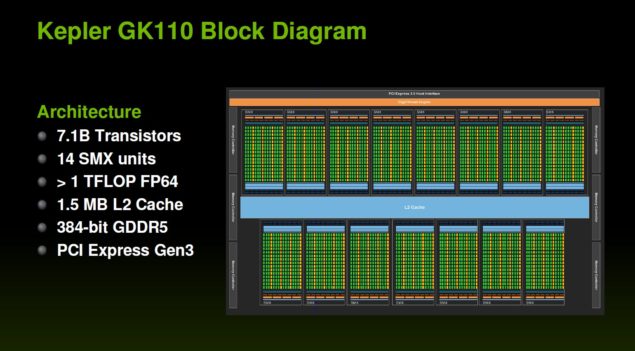 According to certain sources the card whatever it is, is set to debut on the Motreal Gaming Event on 16th / 17th of October. The possibilities are either the Dual GTX 790 (doubtful), the much awaited GTA Titan Ultra or a lower end card then the aforementioned.

Our money is on the GTX Titan Ultra. After the GPU '14 conference and the coming of the 290X Nvidia need to make a comeback in the eyes of the PR Department. Utilizing the GK110 core seems to be the perfect choice. Its not a new chip and should be relatively easy to reconfigure it to full potential. The Titan is currently toe to toe with the 290X, even knocking out the same in some (benches here). With a fully unlocked GK110 core, Green can get a clear undisputed victory.