While motherboard makers work on their new X99 chipset based motherboards, EVGA's Jacob Freeman has shown off their upcoming X99 motherboard prototype at the Computex 2014 booth which looks beastly. The Haswell-E platform which launches in September 2014 will feature the high-performance Core i7-5960X CPU featuring 8 Cores, 16 threads and a $999 US price tag. 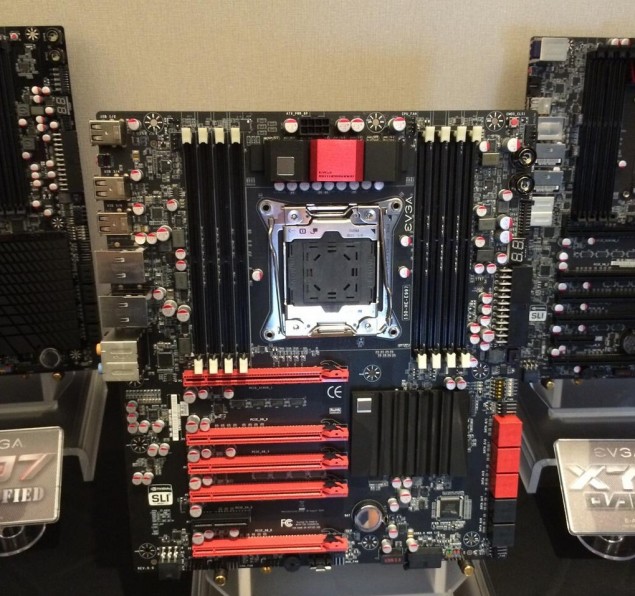 There's no name provided for the EVGA's X99 motherboard but Jacob has mentioned that the board is an early prototype and that is obvious by the color scheme and odd DIMM colors as mentioned. Looking at the features the motherboard offers, we can say that this one falls towards the X79 FTW in terms of design scheme rather the more high-end classified variant.

From a technical perspective, the EVGA X99 motherboard features the LGA 2011-3 socket which is massive in size and supports Intel's upcoming Haswell-E processors which include the Core i7-5960X, Core i7-5930K and Core i7-5820K. The motherboard is powered by an 8-Pin CPU power connector which provides juice to the socket while the 24-Pin ATX connector powers the rest of the board. The VRMs are cooled by a massive heatsink and same for the X99 PCH however these aren't final designs and we can look at better colors and designs on the final variant.

The EVGA X99 motherboard prototype has a black colored PCB and retains the red and black color scheme which EVGA has become fond of in the recent years. Eight DDR4 DIMM slots are located on the board, four on each side of the socket which can support Quad Channel DDR4 memory with speeds of 2133 MHz like the one we saw yesterday from memory makers Crucial and Corsair which are impressive from their design scheme. The memory slots are powered by a 3 Phase VRM located on their sides, the left hand corner has a few power switches for OC support, a V-Check Point and a Diagnostic LED. You can notice that EVGA retains the right angled design scheme to allow easier cable management.

Expansion slots include five PCI-e 3.0 x16 and a single PCI-e 3.0 x4 slot, these are powered by the 40 PCI-e lanes from the processor itself, a 6-Pin PEG connector adds additional power to the expansion slots in case users want to use multiple graphics cards. There's no cheesy audio scheme on the motherboard but we can hope that this being a prototype didn't include one yet. Right next to the PCH heatsink and a variety of ports, the 10 SATA 6 GB/s ports along with a few fan headers and USB 3.0 headers. A USB 3.0 right-angled header is also situated on the bottom of the board. The I/O scheme includes a vairety of USB 2.0/3.0 ports, Dual Gigabit Ethernet LAN and an audio jack. EVGA didn't reveal the launch date or pricing on the board but we can expect it to be similar to a performance oriented X79 motherboard around the $299 - $399 US range. You can find the list of specifications for Haswell-E processors below: