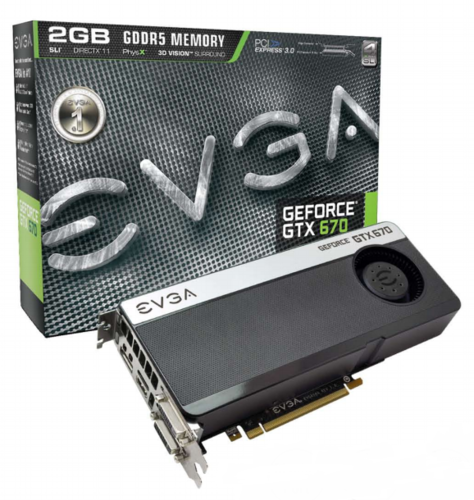 EVGA's GeForce GTX 670 Signature has been listed by online for a price of $409, the card features a the GK104 Kepler core and launches tomorrow.

The GTX 670 Signature by EVGA comes packed with 1344 Cuda Cores, 112 TMUs, 32 ROPs. The core clock is set at 915MHz and 980MHz Boost clock. From the picture we can see that the card retains the reference design featuring the shorter PCB design which we detailed earlier. A 2GB (256-bit) memory is included on the card which runs at 6GHz effective pumping a memory bandwidth of 192.26GB/s.

The card requires a minimum of 500w PSU to run optimally, Power is provided through Dual 6 Pin connectors. Benchmarks and an early preview of the card can be found in the following link: