EVGA's GeForce GTX 660 Ti has been spotted and details of EVGA complete upcoming lineup has been detailed by Videocardz.

According to the site, EVGA plans to four variants of GPUs based on the GTX 660 Ti. List includes the following:

The reference model runs at the stock 915/980/1502MHz clock speeds featuring 2GB of GDDR5 memory and a reference design. Card is powered through two 6 pin connectors while display options include 2 DVI, HDMI and a display port. 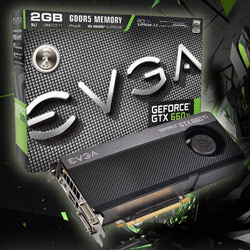 The Superclocked model comes with a reference design but has factory overclocked specs of 967MHz Core and 1045MHz boost frequency while memory runs at the stock 1502MHz (6GHz Effective) frequency. Card is again powered through two 6 pin connectors while display options include 2 DVI, HDMI and a display port.

The only 3GB model from EVGA features factory overclocked settings though exact speeds are not known. As for the cooler, the card would be bundled with a backplate which the user may add or remove as he sees fit.

The price range of the cards would fall between $299 upto $399 for the 3GB models. Expect launch in a few hours.