EVGA Double Bios means two things; an encouragements from the graphic vendor to dabble with custom bios and an added safety net. For the gaming enthusiast trying custom bios the main problem remains that in the case of a failed bios your card is basically dead, though it can sometimes be revived at customer care. No longer though, EVGA’s Double Bios, which varies from Gigabyte Dual Bios system only slightly but quite significantly, will allow users to safely try out custom BIOS and give them a second life in case of a failing one. Some EVGA cards will even have Three Bios! The EVGA Double Bios Card List is also given at the end.

What EVGA Double Bios could Mean for the Average Gamer?

EVGA's Double Bios would mean very less for the average gamer, in our opinion. The average gamers very rarely try Custom Bios and Bios Failure is rarely the reason for Card Death.  Kingpin Overclocks are done on Custom Bios too sometimes but they have a generous supply of Graphic Cards from their sponsors and dont need this safety feature. The part of the community that will most benefit from this is the Amateur-Enthusiast target group of overclockers. The target-group which though enjoys squeezing every ounce of performance and attempting to break Mid Tier records still cant afford to actually loose the GPU amidst their fun. It is worth noting that EVGA Double Bios might later include updates that will unlock more overclocking capability as well.

Even though Gigabyte Already has  Dual Bios system it is quite different from EVGAs Double Bios, Gigabytes Dual Bios is a safety net - and just that. Incase of primary Bios failure it will switch to Secondary Bios failure. EVGA's Double Bios actually encourages custom bios and allows users manual switching between the two Bios. 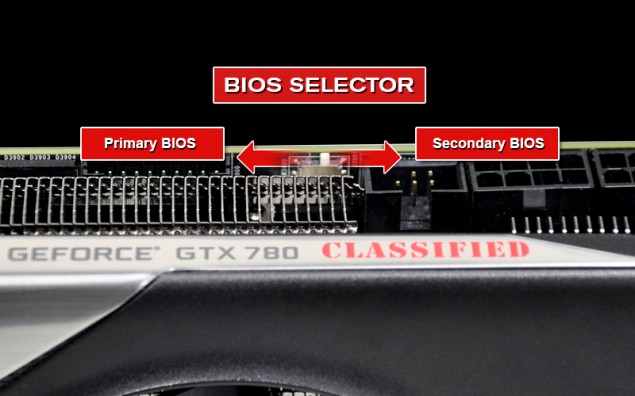 The card list that EVGA aims to have Double Bios has also been announced, the Amount of Bios a card has is also given.