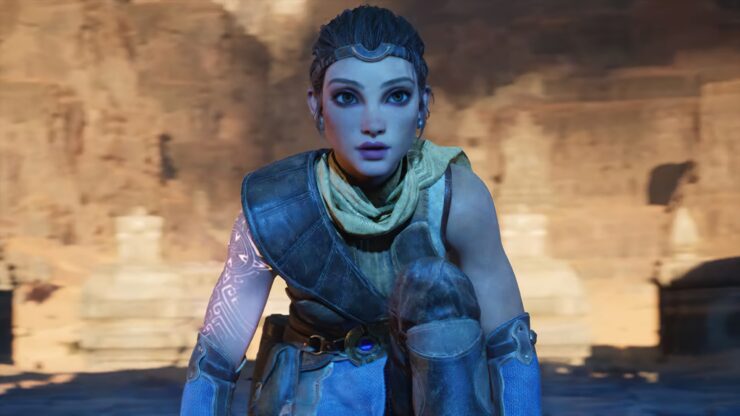 One of the manifest goals of the Unreal Engine 5 is to essentially allow game developers to directly import film-quality assets made of billions of polygons without requiring much tweaking in terms of polygon or draw call budgets, nor will it be needed any longer to manually author LODs and to bake normal maps. The Nanite microgeometry system at the foundation of the Unreal Engine 5 promises to scales and stream all of that with virtually no loss in quality.

In a video interview with Gamespot, Epic Games Chief Technical Officer Kim Libreri expressed the belief that games and movies will be even more intertwined thanks to the next-generation of hardware and tools like the Unreal Engine 5. He even suggests this could create brand new forms of entertainment.

For quite a while, the core tools that we use to make assets for games and movies have been pretty similar. There was always this extra stage of making normal maps and low-resolution meshes [until Unreal Engine 5]. I was in the film business for a decent amount of time making movies and over the last 20 years, Hollywood sort of pioneered computer graphics and the pursuit of realism. There was a lot to be learned from those techniques. As we approach peak photo realism for interactive entertainment within games, we were able to sort of get ahead by actually supporting that industry, and not in a way that was a diversion. Almost everything that we've done that enables Hollywood to make better pixels is also being used by game developers - better blend shape systems for faces, better eye shaders, better hair, we're seeing all our developers making games that require digital characters to use that stuff. What it's definitely doing is the simple fact that hey, the engine produces better looking pixels out of the box. But the really cool thing is that we're now seeing a crossover of the way that people think in both industries. I think you see great storytelling games built on the Unreal Engine and other engines that are definitely using Hollywood tricks to lens things and frame things and help audiences or players understand better the story that they're trying to tell.

Facial animation technology is pretty much the same in both industries. If you go and play Red Dead Redemption, or Horizon Zero Dawn, those have great facial animation. It may not be quite at the same fidelity today on this generation, but it will be on the next generation. The two industries are helping each other. But there's this cool side effect of working on the Mandalorian, where Jon Favreau is able to use a real-time engine to produce the pixels that make his final shots. Make him start to think about 'Oh, well, if we do a dogfight here, should I make it a gameplay dogfight, should I make some vehicles that I can fly, should I make a weather system?' I think eventually what's going to happen is that IPs will no longer be like 'Oh, it was a movie that got converted into a game' or 'It was a game that becomes a movie'.

I think there'll be this continuum between the two worlds. And I think that the artists will crossover. I think that we'll see when it comes to content creators for making CG assets, whether it's making a car or making a chair or whatever, they'll be the same for both industries. We'll see massive cross-pollination between these two worlds. Does that mean that games and movies will be better? Yeah, but I think we'll see new types of entertainment. Look at how we're blurring the lines in Fortnite, we have concerts happening where millions of people take place. And I think entertainment is going to go to this awesome mutation over the next five years that really blurs the line.

I have no idea what Warner Bros. plans to do with it, but imagine they were making a new Batman game for next-generation consoles. We know that's going to look amazing, it's going to look pretty much like a high-end animated movie with badass video gaming action. Well, wouldn't it be great for fans to go deeper and see animated stories in that world using the same assets and the same characters? Wouldn't it be great that then things are rendered live on your PlayStation 5 or your Xbox Series X, and they're shareable and modifiable and the sky's the limit? I think we're gonna see some really crazy developments over the next five years.

As mentioned by Libreri, Jon Favreau famously used the Unreal Engine 4 for its highly successful Mandalorian series, though it's not the first such case in the movie industry. Whether the updated Unreal Engine 5 will be able to create game-movie hybrid, though, remains to be seen. We'll certainly be looking with keen interest.