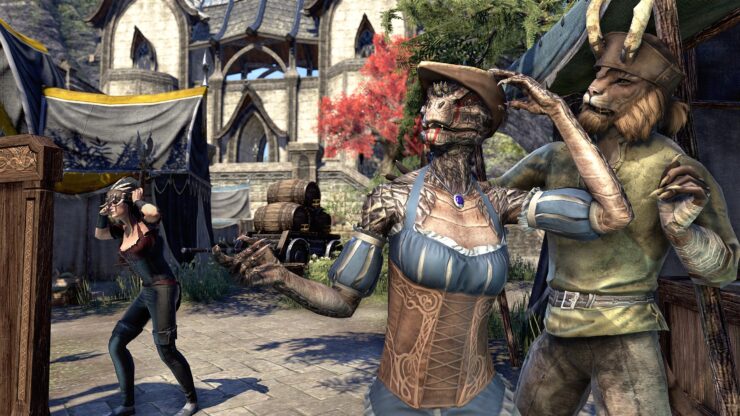 During Gamescom 2016, we had the chance to meet up with Zenimax Online's President and Elder Scrolls Online Game Director Matt Firor to talk about the game.

The game has been doing very well lately. Update 11 was recently released on all platforms, adding two new dungeons and several improvements such as text chat on consoles and a PvP town capture system in Cyrodiil.

However, much bigger things are coming with One Tamriel (set to allow players to group anywhere in PvE regardless of level and alliance) and player housing coming after that. We've talked about these features and a lot more in our overview of the game's future.

First of all, in the game's community folks got used to big QuakeCon presentations where you would showcase the game's upcoming features, but this time there was no presentation. I'm wondering whether you have something special in store for later this year to make up for this?

Now for the big elephant in the room, is there anything at all you can tell us about player housing?

Really the point of Elder Scrolls Online at Gamescom 2016 is to talk about One Tamriel, which is the next big thing. Housing is the thing after that, so we're concentrating more on One Tamriel right now than player housing, but it is going to happen and it is going to be the update after One Tamriel.

Some questions from the community. For PvP players, the gap closers issue is pretty important and they'd like to know when you plan to fix it.

Yeah, we've been looking at that for a long time. It sounds easy to fix but it's not, because of the way the mechanics work behind the scenes and we don't want to make them not work at all. So we've been slowly looking at how it can be done but yes, it will be fixed.

Roleplayers would like to know whether you have something special coming out for them, like sitting at tables and the likes?

A while back, you demonstrated an Arena PvP mode at a convention. Is it still on the roadmap?

We have a list of things we're working on. That's further out, but yes, we are still looking at it, it's still in our plans but we don't know yet when it's going to launch. But it is something we want to do.

Okay. I guess the same thing could be said about spell crafting?

Same thing. With spell crafting we actually got in enough to start seeing how it worked, we didn't like the design so much and it was going to be more work than we thought to get it to launch so we kind of put it aside to do Thieves Guild, Dark Brotherhood, One Tamriel, housing etc.

But it will come eventually, it's just further out.

Do you intend to introduce new skill lines?

Yeah, we have things we want to do after One Tamriel and housing. But you know, for Thieves Guild and Dark Brotherhood we introduced new skill lines and we like to do it from time to time.

Are you potentially interested in adding new classes in the future as well?

Yeah, maybe some day. We all have ideas but for now we're focused on One Tamriel which is a huge change behind the scenes for the game, with players of all levels playing together, so we want to do all that before we start adding new things.

Did you arrive at the decision to bring everyone together with One Tamriel because of player feedback?

Actually, yeah. Our DLC is not level based: you can go to Orsinium and it doesn't matter which level you are. A lot of feedback was: "it's great, I can play with all my guild mates here". We had thought about doing this for a long time, it's always been on our list to do. We played around with that idea in the DLC because it's smaller and the player reaction was great, so that led down the path to One Tamriel.

So you believe it will have a strong appeal to players.

Yes, especially new players. For players it's all about social, because right now outside of a dungeon you can only group with people plus or minus four levels and no one in your alliance. With One Tamriel you can group with almost anyone, which makes the game much more social since you can log in and play with whomever you want.

If you have a friend that has not played the game yet and you have a Veteran rank character, you can't really play with them, but after One Tamriel you'll be able to. It's what players expect now: the concept of levelling really comes from the whole first and second generation of MMOs, where everything was a hurdle to be overcome and you have to grind your way to the end, but it doesn't have to be that way.

You can just log into the game and have fun.

Are you looking to add more world events, like Dark Anchors but different ones?

We're doing that more through events, like the Witches Festival. I know what you're saying though, we don't really have plans except in One Tamriel where we're going to change zones a little bit so that they're more like Orsinium and they have world bosses. You're walking through Glenumbra and there'll be a world boss somewhere now.

Do you have any changes coming to crafting?

No, our crafting system is really good, so we're happy with it.

Bethesda as a whole has been kind of championing mods on consoles with Skyrim Definitive Edition and Fallout 4. I'm wondering if this is something you may consider for Elder Scrolls Online?

We can't, because...maybe UI (user interface) mods, but you can't really do UI mods on consoles, because then your controller wouldn't work. Bethesda can do that for its other games because they're single player.

Lately there's been a trend of bringing online communities together through cross-play. Is that something you're evaluating for Elder Scrolls Online?

That is not a technical issue, it's a business issue. We're on different platforms and each partner has its own ideas on which groups they want their players to be with. It's easier for everyone if they're just in separate communities, that's just the way it is for now.

Next year, Sony and Microsoft are planning to introduce the PlayStation 4 Neo and Xbox One Scorpio consoles. With the game still having many years worth of content planned, are you looking at supporting them?

Yeah. We don't know much about Sony's because nothing has been announced yet,  we do know about the Xbox One. One of the cool things about ESO is that it was originally developed for PC, so the engine already understands the concept of scalability. From a development point of view, both PS4 and XBV1 are very much like PCs, so as they bring new power online we can hopefully just take advantage of it just like we do on PC.

Speaking about the PC version, a while back in a Twitch livestream it was mentioned that Zenimax would be working on DirectX 12. Is that still being worked on?

We're DX11 now and for the range of PCs that we have to support around the world, that's the right decision for us. When you go to DirectX 12 there are restrictions, we're good where we are for now.

Where do you see Elder Scrolls Online in two or three years from now?

Oh, we have plans for a long time. We have lots of content planned; you know, it's like online games, we'll be making content for as long as people want to play the game. We're in for the long haul.

Player numbers have been growing, is that correct?

Yeah, very good. We announced seven million players since launch at E3, the numbers are even higher now. We're very happy with the number of players we have.