EEDAR (Electronic Entertainment Design and Research), a research firm focused solely on the video game industry, was founded in 2006 and now services with its data collection (the firm holds the Guinness World Record for the largest collection of video game facts and information) almost every major publisher and developer in the industry.

EEDAR hosted two interesting presentations at GDC 2016. The first one, called Awesome Video Game Data and presented by EEDAR's Co-Founder and Creative Director Geoffrey Zatkin (previously a game designer on Everquest I, Everquest II and The Matrix Online), is now available here. For the purposes of this article, we've extrapolated some of the most interesting highlights.

For instance, the firm estimates 20 million units sold for Microsoft's Xbox One as of December 2015. This is particularly interesting since Microsoft has decided not to release unit sales for a while, instead opting to release other figures, such as monthly active users.

A similar estimate was shared by VGChartz, though according to their data Xbox One reached 20 million sales in the week of February 13th, just over a month later than EEDAR. 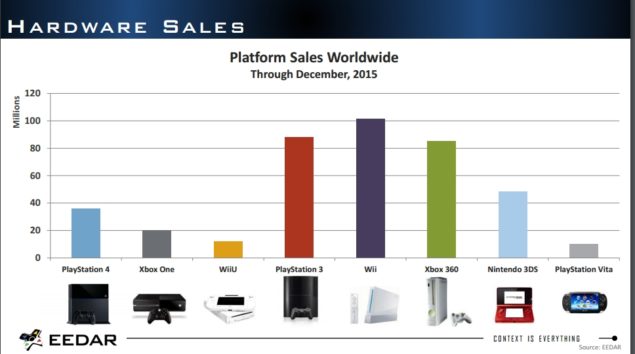 There are many more interesting facts in the presentation, though. For instance, the quantity of game releases on Valve's Steam have more than doubled from 2014 (1,500) to 2015 (almost 3,500). That's in all likelihood to the explosion of Steam Greenlight, where almost every title is accepted within a week; there's a fair argument to be made that all of these games may do more harm than good, with several users calling for a stricter approval process. 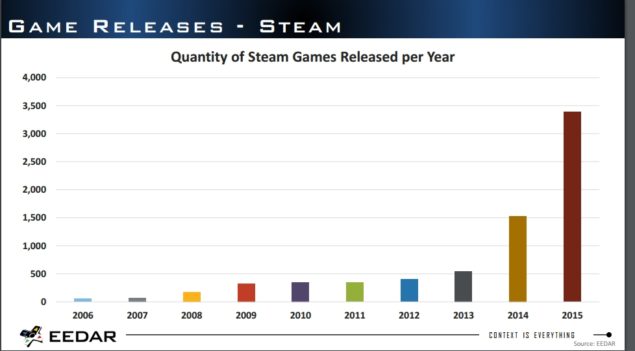 According to EEDAR, this generation is also ahead of the last one when it comes to sales when removing Nintendo's consoles (Wii and WiiU, respectively) from the equation.

About 60% of the North American population is made by gamers, with an average age of 35 years and a male/female split of 55%/45%. The eSports prize pool also increased twofold from last year, going from approximately $35 million to over $70 million.