EA has unveiled that they would be unveiling the next generation of their FPS franchise developed by studio DICE "Battlefield 4" on March 26th.

As you may note, the footage shows a tank gearing up and moving forward. It also shows a reveal on 27th March.

A month ago, we saw some press invites surfacing the even with a cropped out image of a new game in the back. Turns out to be that the press invites were for the live unveil and demonstration of DICE's Next gen Battlefield 4 First person shooter title which would be released later this year. The cover image of the new Battlefield 4 title has also been released.

"Please join us to celebrate a new era of Battlefield," says the company's invitation" Polygon

As for the news, its been a great two years experience with Battlefield 3 and has just received its final End Game DLC. So its highly possible that the game would be released around October-November 2013 timeframe because Battlefield 3 launched on October 2011. Players with Medal of Honor: Warfighter would be granted early access to the beta when it arrives. 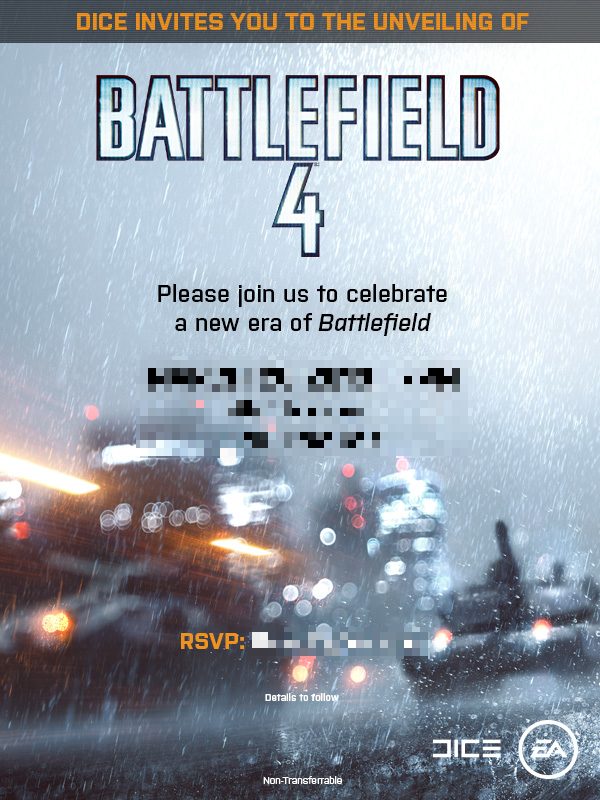 DICE or EA didn't mention which platform would they select to showcase the game but Battlefield 3 was show - cased on a PC at E3 2011 which was also the lead platform for the predecessor. PC could possible be the lead platform for Battlefield 4 but the game itself would be this time showcased on the PlayStation 4 console since these next generation consoles would be ideal to demonstrate the 1080P/60 FPS visual fidelity advantage that PC gamers have been rejoicing for quiet a while. As for the graphics themselves, Battlefield has been the pinnacle of graphics on PC and this time the consoles too with the use of Frostbite 2.0 engine. The update version would bring 80% utilization of Frostbite 2.0 engine in Battlefield 4 compared to 30% in Battlefield 3 and full 64 players Multi-player on the flagship maps.

A few details on the games were leaked which showed Commander system would make a return, making a single player of the squad the commanding officer of the unit who can redirect players according to his will. Both body and voice control options would be made available to the commanding officer. In addition to that, Female soldiers can also be deployed to the battlefield in addition to the male soldiers. There would be three playable factions in the game, Russia;China and USA although single player campaign would be based on a modern setting with the USA faction against Russia and China.

The game would allow internal support for video playback and sharing of the files alongwith several improvements to the EA’s battlelog system such as linking profiles to tablets and mobile devices, auto login, support for cloud saves and better stats reporting on battlelog. Internet would be needed all the time to fully access these features along with multiplayer. There would be a individual store to buy DLC known as the “Gem store”.

If Battlefield 4 does comes up with even half of these features listed, it would be an instant success in the FPS genre scape. More would be unveiled on March 26th.