Update: A slight clarification on my part. The screenshot only proves that the origin client is actively looking at the list of the programs recently run. Basically it shows that origin is aware of the files you have on your PC (that have been run).

[Report] A very interesting thread on the Reddit was sent to me by my colleague Tyler Roemhildt. It turns out that EA is snooping files aka spying on your usage habits via the Origin client. And it looks like this is more or less confirmed because Origin representatives claim "they are trying to get to the bottom of this".

Privacy is a very sensitive topic in the world of Internet and one of the biggest gaming clients spying in your usage habits is cause for concern. Now what exactly does "usage habits" mean? Well, from the looks of it, Origin is taking its merry time looking around the personal files on your computer, most probably when they are running, and this includes your browser as well. Now while we do not know whether it can spy on your browsing activity as well, the mere fact that it is accessing the browser process is discerning. Take a look at the screenshot posted by user drsniper121: 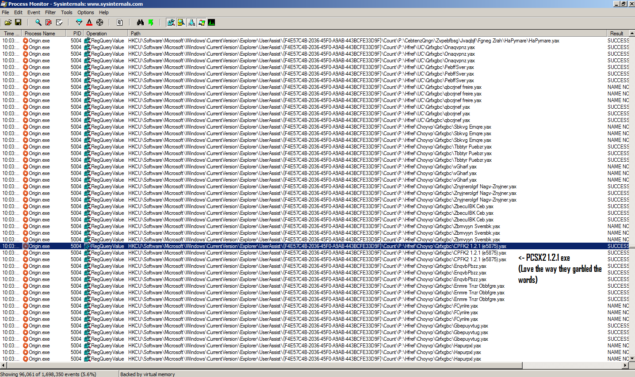 The screenshot doesn't appear to give away much at first but the files are hidden using a ROT13 Cypher (credits: brainiac256) used by the Windows Registry. This particular file is the popular PS2 emulator called PCSX2 1.2.1 encrypted with a ROT13 cypher. Dont believe me? Paste "PCSX2 1.2.1" in this ROT13 encrypter here and see what you get. Infact some of the process shown in this screenshot actively decode to Mozilla Firefox, Google Chrome, iTunes and Foxit Reader apart from a game or two (Torchlight). This is ofcourse a very serious allegation coupled with weighty proof and it was only a matter of time before an Origin Rep appeared on the site and released a statement:

"Thanks for bringing this to our attention. I've been working with our live operations team to fully investigate this issue. Origin is not spyware, and there should be no privacy snooping operations of any type. I hope we will be able to update you guys on the investigation soon, we're gonna get to the bottom of this......Please message me any additional details or info that will help us investigate. We take claims like this very seriously."

Some users also pitted a much neutral stance by stating that EA/Origin's TOS (Terms of Service) actually claims that they might do something like this and since you agree to the same TOS before using the client, its not technically doing anything wrong. Here is some of the relevant portion posted by the user:

EA collects non-personal information along with personal information when you actively provide it in the context of various online and mobile activities including online and mobile purchases, game registration and marketing surveys, for instance. In addition, we and other third parties use cookies and other technologies to passively collect non-personal demographic information, personalize your experience on our sites and monitor advertisements and other activities as described below.

Ah, so they are doing it for our benefit, whew, that makes me feel so much better. Jokes aside, the thing is, massively collected information or Big Data is the crux of predicting and analyzing marketing trends.  However doing so in such a covert and hidden-from-the-user-way is borderline unethical. There should be an opt out option in the gaming client like so many other products offer. Oh wait, there's this part in the TOS "if you do not want to use this technology, do not play.". So this is a very interesting conundrum where a very serious allegation, along with proof, has been placed on EA and Origin. Now, I am pretty sure they would be safe from a legal standpoint, but this could turn into an absolute PR disaster if it is not handled correctly. We will be keeping an eye out on the news to see how this turns out.

#EA's Origin is actually a very accomplished file snooper as well. Is there anything that doesn't want to spy on me? http://t.co/sFXk3BMDgE