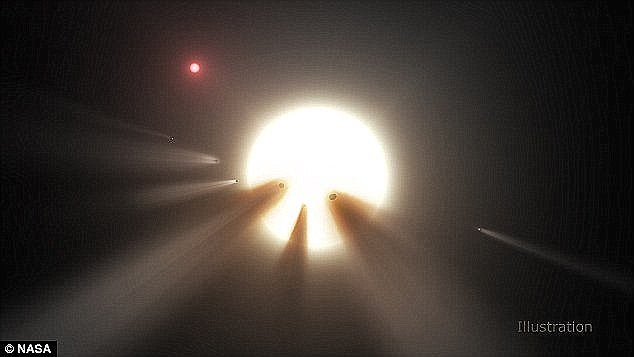 Back in October a strange pattern of light was discovered near a distant star called KIC 8462852. Astronomers were intrigued by these light patterns as it was nothing like anything seen before. Usually when a planet passes by a star, dips of about 1% are observed in the star’s brightness but in the case of KIC 8462852 dips off 22% are being observed. This suggests that something huge is passing by but this doesn’t end here. Another star that is showing dips in brightness has been discovered.

EPIC 204278916, the new discovered star is approximately the size of the sun in diameter but is half its mass. This star was discovered by the NASA Kepler spacecraft in 2014. Ever since this discovery a team of astronomers from Max Planck Institute for Extraterrestrial Physics in Germany, led by Simone Scaringi has been observing these light curves or dips. This star has turned out to be stranger than the previously discovered star. Over the period of 78.8 days of observation of EPIC 204278916 it was observed that there was irregular dipping up to 65% for about 25 consecutive days. What is large enough to cause this enormous dip in light? When dips in KIC 8462852 or ‘Tabby’s star’ were observed the researchers came up with two probable and one, not-so-probable explanation.

One probable explanation suggested that the irregular pattern in light is observed due to a large swarm of comets that are orbiting the star. The second explanation suggested the Tabby’s star is a distorted star that spins so fast that it becomes ‘oblate’. This means that it has a larger radius at the equator than at the poles. Paul Gilster from Centauri Dreams said, “This produces higher temperatures and 'brightening' at the poles, while the equator is consequently darkened."

The not-so-plausible explanation brought forward the idea that the dips could be caused by a kind of Dyson Sphere. Dyson sphere is basically a type of huge sphere that is made of solar panels that surround a star. This type of sphere has often been featured in various science fiction stories. Jason Wright, astronomer from Penn State University told ‘The Atlantic’, “Aliens should always be the very last hypothesis you consider, but this looked like something you would expect an alien civilization to build.”

Surprisingly it was found that the probable explanations didn’t turn out to be so convincing. The distorted star hypothesis was rejected by researchers and a study in January pointed out that for a star to get dimmed by 20% in a century, approximately 648,000 comets would be needed, each should be at least 200 km wide.

Can disks explain this phenomenon?

So could a dust disk work? The German team that discovered the new star suggested that these dips could be caused due to existence of protoplanetary disk that is positioned ‘edge on’ in relation to the Earth. This orientation would mean that it is blocking the light from the star and also we are at a wrong angle to view its infrared radiations.

So what exactly is a protoplanetary disk? It is a disk composed of dense gas and dust and rotates and usually surrounds young stars. EPIC 204278916 is relatively young and is not older than 11 million years. This seems like a lot but keep in mind that our sun is 4.5 billion years old. Ethan Siegel explained over It Starts With a Bang, “Many disks are very thin, and we’re used to seeing them at an angle. However, every once in a while, we’re bound to be aligned with a star that has its disk oriented edge-on to us, which means that any infrared radiation would be invisible. Young Stellar Objects (YSOs) are known to have the large flux dips that this weird star has, and they’ve recently been shown to come in a variety of inclination angles."

According to Siegel this hypothesis could be applied to the KIC 8462852. It was initially argued that this star could be hundreds of millions years old, but according to a large number of astronomers this star is quite young like the EPIC 204278916. Even if these astronomers are wrong and the star is older, it is known that even mature stars are hosts to rings of comet debris. Rings of dust are also known to be present and are called circumstellar disks which always have a large outer disk and often an inner disk as well.

It is possible that one such disk is surrounding the KIC 8462852 in an eccentric orbit and is the result of causing these dips. Siegel explained, “If this star turns out to be younger than is generally accepted (which many professional observers think it is), if it has a disk that happens to be edge-on (so we don’t see the infrared flux), and if there’s either a warped inner disk or cometary-like debris, then what we’ve discovered is a new stage in the early evolution of a class of stars!"

A long way to go?

The German team’s observations have to go through the formal peer-review process, so it is debatable. They have put their results on pre-print site Xiv.org so other researcher may present their views on these observations. It is going to take a lot of analysis and research before any hypothesis can be approved. Kepler is expected to bring in new observations next year on EPIC 204278916 and researchers are already gearing up to point the Las Cumbres Observatory Global Telescope Network at KIC 8462852. This means that we may not have to wait very long to get some viable data in the future.