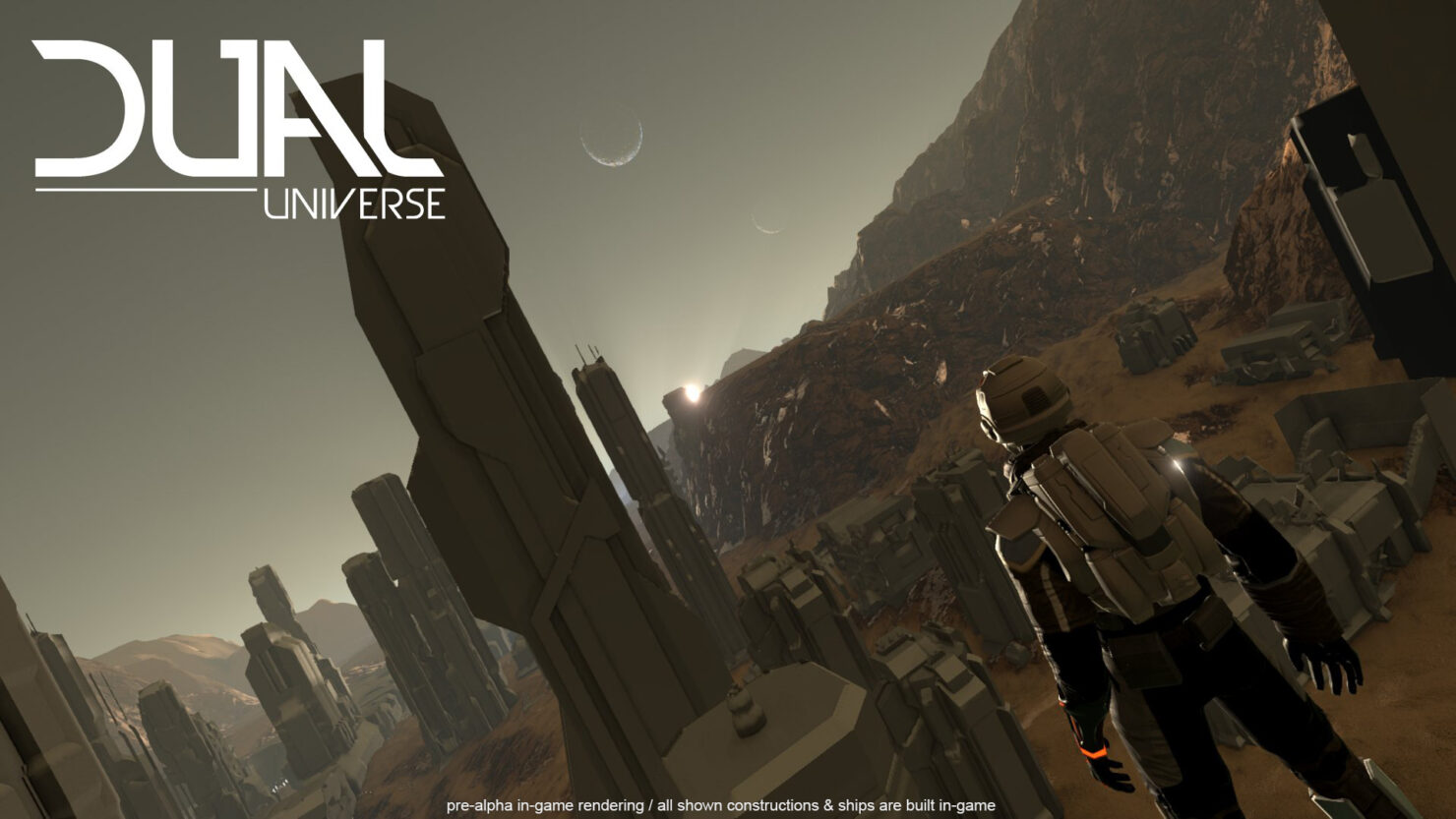 Four months ago, French indie studio Novaquark announced Dual Universe as the first "boundless" MMO. The developer is now gathering support and funds via Kickstarter, with a campaign already 64% complete and 23 days remaining.

At Gamescom, I had the chance to sit down and speak with Founder & Creative Director Jean-Christophe Baillie. It was a really interesting talk that highlights what makes this game (powered by Unigine 2) unique. It doesn't just offer a huge universe like No Man's Sky or Star Citizen, but it also promises to let everyone (and I mean everyone) play together and edit (almost) everything in it. But let's hear it directly from Baillie himself.

Tell us in your own words the core of what Dual Universe is.

For us, it's about getting back to the root of what it means to be an MMO, with one giant world where everybody is at the same time. There's no different instances, no different server: the concept is called single shard, EVE Online does that but that game has different zones, you also can't get into zones if there's a certain number of people in it.

We are one step beyond that, with what we call continuous single shard. We can have tens of thousands of people in the same place.

So....You're not planning to add any limits to the number of players that will play in the server?

Let's say that five million players buy the game. They would all play in the same server?

Yes. Trouble starts when people gather in the same spot, right? What we do is that we dynamically split space, recruiting more CPU power to that particular spot.

Are you using cloud technology?

Yes, mostly to deploy machines. But the core technology behind Dual Universe is developed by us. The other trick is that when people are far away, we don't update them as frequently. It won't matter for gameplay as Dual Universe is not a competitive first person shooter - shooting accuracy will be based on a lock&fire mechanism.

So yeah, we could have millions of players in this world, though honestly I think it would take some time. I don't expect to get one million players on Day One...But based on our testing, it should work. It's exciting, because it's another genre of MMO, one that has not been done before.

It's also important to note that all the content is created by the players themselves. They can build things in Dual Universe from houses to cities to space ships.

The way it works is there's a territorial system, political system and in-game player driven market for the world economy. If you create the blueprint of a spaceship, you can then start to mass produce it and place it on the market, so as a player if you don't like to build ships you can just buy a ship and use it.

Also, the player can freely edit the world. You can dig holes anywhere you want and collect materials.

What if you build a house somewhere, then, and other players dig holes in it?

That's part of the safe zone design, which takes care of that particular problem. Of course, it's a fundamental issue: we don't want to come back and find the house destroyed. It will still be possible to destroy the stuff created by other folks, but only outside of the safe zones. Though you could also use a "protection bubble", a shield of sorts, to protect your stuff in that area: there are a lot of layers of protection.

Of course, there's also building a space ship which you can build any way you like.

I'm just wondering though, if you build the ship in a way that's physically wrong, will it still work or not?

No, you have to be careful about that or the thing will never fly! That actually brings us to the second part of ship building, where you have to script all the parts together so that they interact properly.

That's going to be done in LUA. If you don't want to script, there's an automatic system that will look at your ship and make a script that allows you to actually pilot that ship. But that's if you've built everything right - if you forgot the thrusters, for instance, it's not going to fly.

Still, you can do many other things in Dual Universe without building anything or even mining; in the end, the game is about specializations.

How big is this universe?

There is no practical limit, it's all procedurally generated. But the question is not "how big is the universe", rather "how will I explore it". In fact, in Dual Universe you'll need a Stargate to move to another system, it's going to be a big and far from easy achievement. The way it works is that you send a probe at real speed and it will take time before it actually gets to the destination. It will then start to build a Stargate; of course, you'll want to carefully decide where to invest the time and money to build a Stargate. You'll have the chance to scan for potential resources, which is probably the most obvious reason, but there's more. You could even rent the access to your Stargate and ask a fee to anyone who wants to pass through - that would be a bit like building the highway of the galaxy.

I gather that all players will begin in the same system, then...

They will actually begin on the same planet and even place. You escaped the destruction of the Earth and you'll begin right where the Ark ships drop you, but the idea is that players will spread away from that point. In the safe zone there are no interesting resources, so you will have to go out. This is part of our plan to encourage players to play together, for instance markets are also physically localized. You can buy something from another planet, but you'll have to get there to actually take it.

That means there will be player couriers.

That's right. The side effect of that is players will tend to aggregate to nearby markets because, well, you don't want to spend too much time travelling and if you think about it, this is the same reason real cities were built in certain places.

Will you need to refuel your ship?

Yes, definitely. You can buy fuel, you can mine it...

Are there going to be land vehicles?

We have no plans for that, but there's no strong reason why we shouldn't do it at some point. The way you'll travel on land will be through hovercraft.

Will there be any survival element in Dual Universe (having to eat, drink etc.)?

We don't want to do half-baked stuff, as there are many good and bad survival games out there now. But in the long run, even after the release when we're going to add expansions, I think it would be nice to have a bit of survival. You may need to plan for your food if you're going on solo missions far from the markets, but if you are in a civilized area then food won't be a problem.

What about extreme weather?

We have to think about it, it would be cool but we have a limited amount of resources. But if the game is a success, then we can last over time and add more features steadily.

Since the game is set in space, are there aliens?

Good question. The answer is probably no, since we want everyone you encounter in the game to be a real person. We may have time to add animals, that would be really cool, but I don't know when exactly. That would make a lot of sense, some of the animals would be dangerous, it would add a survival element to the game.

But ultimately, it's the story of humanity which is trying to rebuild civilization together.

Something sandbox MMOs usually do is allowing players to create their own factions/civilizations. Will that be possible in Dual Universe?

Yes, we've put a lot of effort in that. The way we call them is organizations, and an organization is a group of players who can actually make the rules of a State, turn it into a democratic nation or a dictatorship or maybe a corporation, or even a guild of pirates. You may change the political structure and the way you split power among members of the organization.

And then you could create a capital city...

That would be cool. It will take time, we need to reach a critical mass of players. You know, it's really a game about roleplay as you can be whomever you want: a merchant, miner, builder...

When do you plan to release the game for testing?

The goal for Alpha test is first half of 2017, around March would be nice. Then we'd like a beta in beginning of 2018 and a full launch before the end of 2018, if all goes well.

There's still a lot of work to do, but the technological ground with which we can build the gameplay is already there.

We really want to have the community involved, as many people as possible, to get proper feedback.

Are you planning to release Dual Universe on Steam?

It's clearly in the plans. It makes a lot of sense, though there will be ways to get it elsewhere. The business model will be similar to EVE, subscription based with PLEX-like formula...Do you know of it?

Yes, you can play the game and earn enough virtual credits to buy the subscription.

That's right. It makes it effectively free to play for those wealthy enough. I like this concept very much; the fact that there's a subscription is also, I think, helpful to build a smaller but more involved community. This makes a lot of sense in a world where players have to create the content.

With a game like Dual Universe, one cannot but wonder if you have considered adding support for Virtual Reality devices.

We have, but it's too soon for us. The real challenge, aside from frame rate issues, would be UI since ours has been designed for mouse & keyboard. It's maybe a bit soon for us to get on the VR train, we'll wait a bit for the industry to set the standard.

Is there any chance the game might make it to consoles?

I really doubt it. Not only for the performance, but again, mostly for the UI. Maybe we could think about it if the console allows you to plug a mouse & keyboard - PS4 allows that.

So you're not planning any gamepad support even on PC?

No. We're aiming at the hardcore PC gamer. We're perfectly aware that there's a lot more people outside this population and that it would be good for business, but for now we're just trying to make a great PC game.