Samsung Galaxy SII, when released, was the most efficient and well-received Android device in the Market. Although we have seen that Samsung Galaxy S III has quickly managed to win a huge fan following as well, but the Galaxy S II users are there to stay for a very long time. Since Samsung Galaxy SII is now a tried and tested device with lots of developers and hackers consistently supporting it, so every new Android OS update gets ported to it quickly. Recently, the Android 4.2 Jellybean got released on various devices and most of the folks think that it’s one of the best Android update to date. Although, even before the OEM update, CyanogenMod 10.1 Android 4.2 JellyBean custom ROM is now available for the mighty Samsung Galaxy S II. Although this CM 10.1 build for Samsung Galaxy S II is still under the experimental phase, but the folks are already downing it on their phones and enjoying whatever works glitch-free. 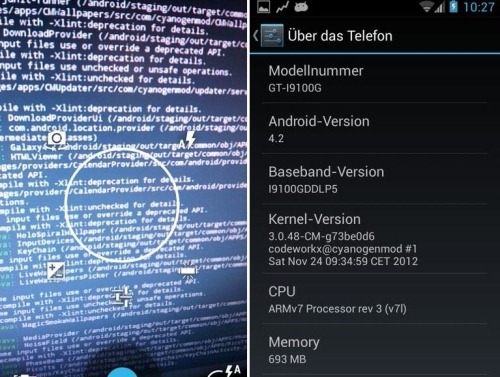 CodeworkX, a member of CM development team and elite Android developer at XDA, has the credit for releasing this ROM for public testing and usage.

For those who don’t know, CynogenMod is based on Android (AOSP) and is contributed, maintained and developed by a whole contingent of dedicated Android hackers and developers. Flashing the CyanogenMod on your phone or Android tablet makes it more awesome with great stability and aesthetics. And we can’t discount the features at all. CyanogenMod gained this massive popularity because of the features and specifications that aren’t present in the OEM released OS updates.

The ROM requires you to be on official ICS bootloaders and for that purpose, you need to be running an updated Ice Cream Sandwich or Android 4.1.2 JellyBean custom ROM on your phone. If you are a starter, then it is highly recommended to visit the official XDA forum section for Samsung Galaxy S II in order to get acquainted with the procedures and terminology. Apart from this, the Google Apps for 4.2 JellyBean are still in an experimental phase so there is no guarantee that you’ll be able to get Google services like Play Store, Calendar and Navigation up and running after flashing this ROM.

In order to download and install the CyanogenMod 10.1 Android 4.2 Jellybean Experimental ROM on your phone, you can search it via ROM Manager and get it from there. However, if you’d like to keep it manual, then download the ROM and flash it via recovery after you are done with wiping the cache and dalvik cache.

We aren’t providing detailed instructions here since this is a experimental ROM and many might screw up their devices trying to get it. So for complete details, FAQs, Issues, Bugs, ChangeLog and installation instructions for the CyanogenMod 10.1 Android 4.2 JellyBean Experimental Galaxy SII ROM, please head to the official XDA thread posted here and get started. Again, all credits for this ROM go to CodeWorkX and the rest of CyanogenMod team.

Microsoft To Bring Windows 10 To Your Android Phones