Last week plenty of new details on the upcoming first person shooter Doom, new entry of the classic series created by id Software, have surfaced online alongside some new screenshots. Some additional details on the game have also surfaced online a few hours ago, revealing more on how the keycards will work, how the game's story will be told and more. 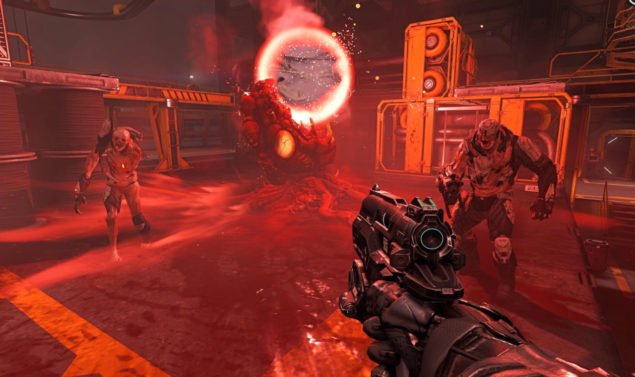 According to what has been said during the latest Game Informer Show podcast, the keycards in Doom, which will come as blue, yellow and red keycards opening the corresponding doors, will be found throughout the levels, but they will be more spaced out than in the original game and they'll be used to progress to the next area or to find secrets. It's been specifically said that the game is not a "keycard simulator" like the original games so we should not expect a massive use of the mechanic.

Doom's storytelling is also looking to be quite interesting. Apparently the game's story will be told as the player plays, a storytelling style which has been compared to Dead Space.

The podcast also revealed some interesting details on the Glory Kills, fast over the top melee attacks that allow players to dispose of enemies at close range. A few months back Bethesda revealed that these Glory Kills won't break the rhythm of the game, as they are very fast paced, and an additional confirmation has come during the podcast, as it's been said that Glory Kills work very well in the context of the game as they give players brief breaks during the game's chaotic battles.

The final Doom release date has yet to be confirmed officially, but it seems like the game might be released this June. Last week Amazon France started listing the first person game by id Software with a June 30th release date. Amazon France has correctly leaked release dates for bigger titles before, like last year's Rise of the Tomb Raider and Forza 6, so there's a good chance the game will be made available sometime during June in all regions.

Doom will launch on a yet to be confirmed release date on PlayStation 4, Xbox One and PC.