DOOM Difficulty Has Been Dialed Up; Non-linear Exploration Confirmed Alongside More Story 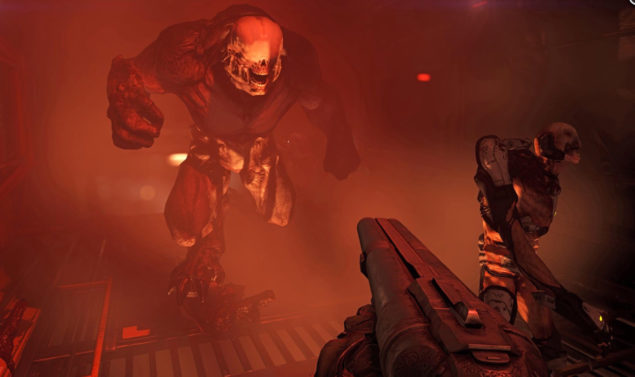 DOOM is coming back in 2016. Although we don't have a firm release date yet, Q2 seems to be correct window, especially after the Amazon France leak which pinned DOOM for a launch in June.

Game Informer had the chance to go hands-on with the game recently. Afterwards, they interviewed id Software's Executive Producer Martin Stratton and the video chat produced some interesting answers.

First of all, Stratton confirmed that the game's difficulty has been upped since the most recent gameplay videos. The team has focused a lot on making amazing combat and delivering a proper challenge.

If you come into DOOM to have amazing combat, then I really think people are going to enjoy themselves. We've spent so much time to try to get that right, to try to get the challenge of it right, the difficulty which has been ratcheted up since you've played. We've actually dialed up the difficulty and we've seen as people played it that they wanted this. It's an action shooter, so your roller coaster ride in this game is about how challenging those fights are. It's super fun when you're diving into these arenas and that's challenging, you may get your ass kicked but come later with a different strategy.

That's what DOOM is about. It's not about canned set pieces, cinematic sequences...the roller coaster is about the action and the combat and it's a blast. Making sure those highs are really high and those lows are lows is kind of what we've done.

The game will feature a bit more story than the previous titles in the franchise, at least for those willing to explore the game to find this out.

The marine doesn't have a name. Story hasn't been the focus of development, the combat has, but I would say we've injected quite a bit more, for people who want to find it and get a little more on how the DOOM marine is and where we hope he heads, it's there for people to find. I like it, I think it's cool stuff and I think it's more so than we've had in other DOOM games and I'm excited to see people's reaction to it.

Finally, Stratton said that there will be a good deal of non-linear exploration, which was inspired by earlier DOOM titles.

When you think about DOOM and DOOM 2, particularly the further you got into the game, there's a lot of getting lost. It's just these mazes that you can get lost in, in a good way as you're searching around for secrets, keycards, pickups and all the goodies. There is definitely that aspect to it. I wouldn't say that we focused on making sure that people got lost, there's a way out to get to that next combat, which is really what the focus of the game is, getting to that next horde of demons that you can take out. But the exploration is really fun, there's a pretty good sense of that non-linear exploration.

A beta for DOOM should be available before launch. There are no details on when it's going to happen, but we already know that folks who pre-ordered Wolfenstein: The New Order will be automatically given access.