Soon enough, all those who got access to the DOOM closed alpha and those who pre-ordered Wolfenstein: The New Order at the right time, will be able to try out the game thanks to a closed beta. While the testing phase has yet to begin, some new screenshots from the new DOOM beta have surfaced online, showing some of the features that players will be able to try out. 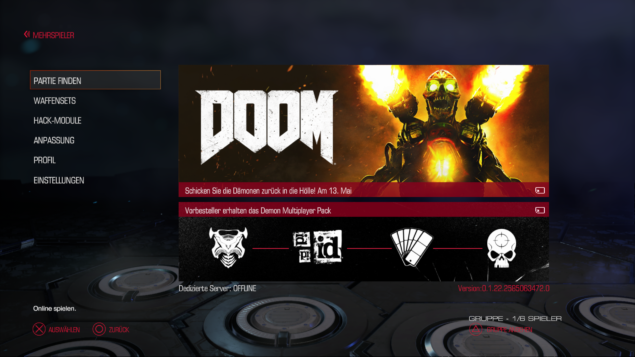 The new DOOM screenshots, which are unfortunately not available in English, showcase the beta's main menu, which include the Hack Modules and Customization options, graphics settings menu, which include Brightness, Motion Blur Amount and Chromatic Aberration Toggle, some of the Customization options  available in the beta and much more. You can check out the screenshots right below.

On a related note, those that had access to the DOOM PlayStation 4 closed alpha have confirmed that the update for the beta is now rolling out in all regions, which will allow them to access the beta as soon as it becomes available in a few days.

Last week, a new DOOM trailer has been made available online, showcasing many of the game's multiplayer features. For the first time in the series, players will also be able to play as the fearsome demons which have haunted DOOM fans' dreams ever since the first entry of the series.

For more than two decades, the DOOM marine has shot, smashed, blasted and chainsawed his way through heaving hordes of hellspawn. But come May 13, when DOOM releases on PlayStation 4, Xbox One and PC, the demons will finally have their day. For the first time in the history of id’s seminal shooter, players can actually become a demon and wreak all kinds of havoc in intense multiplayer matches

DOOM launches on PC, PlayStation 4 and Xbox One on May 13th. The game’s Closed Beta will be held between March 31st and April 3rd, allowing players to try out Team Deathmatch and the recently revealed Warpath mode on the Heatwave and Infernal maps.