The Apple Watch has taken center stage as a new issue with the device has been discovered pertaining to it wearing out. The wear issue has been taken to Reddit and Apple Discussion Forums that are piled up with posts regarding the Apple logo and the text behind the device fading away, or peeling away, as some users are putting it. The most infected and common variant of the Apple Watch Sport is the Space Gray model. It sounds like Apple did not consider the feasibility of the material used for typography crafting behind the Watch. 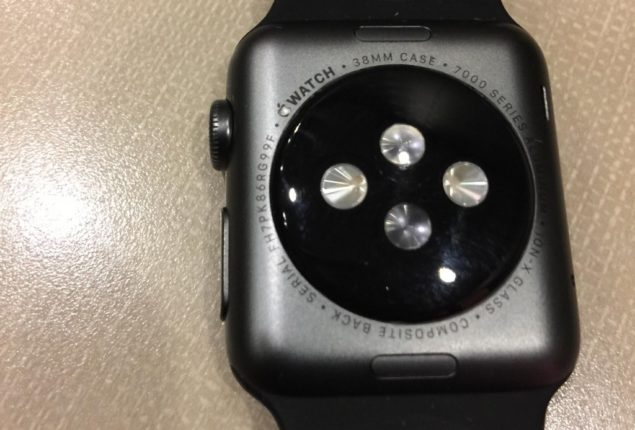 Setting aside the material that was used for the Apple logo and text, it could be the way the Sport model was imprinted with the logo and text. This is because almost no other color variant apart from Space Gray has faced this dilemma. It is absolutely unknown at this point in time what causes the peeling process to start in the Apple Watch Sport model. Several users have been contacted by their local Apple Support who had their own justification for the problematic situation that could led users to have second thoughts about getting the Apple Watch.

Apple Support asked the victims about their routines and environmental factors that the Apple Watch was subjected to. Some of the factors include if the Watch has been in contact with water for a long time, along with high activity levels and local climatic changes. If these are the reasons with the disappearing of the Apple logo and text then there is something wrong with the way the Space Gray Sport model is anodized, ultimately causing the lettering and logo to wither off, revealing the raw aluminum underneath. This definitely does not sound appealing and potential buyers could be stuck in making a tough decision.

Despite the peeling situation, Apple Support has been of immense help in the replacement of the infected variants. All considerations and acquaintances are shared for future improvement. However, the flag point is that the Apple Watch is an expensive timepiece and such dilemmas not only causes the Watch logo and text to wither away but also causes disappointment for Apple.

If you're an Apple Watch Sport user, and happen to have the Space Gray variant with you, are you facing such an issue with your wearable? Let us know in the comments section below.