How much difference does Polygon Count and Resolution Really Make? – Xbox One

Nearly everyone in  the gaming world is talking about polygon counts and resolutions these days. With Xbox fans taking hits because of some non native 1080p titles such as Ryse, and reduction of Polygon Count, we take a look at how much of a difference does resolution and polygon count really make .

Lets begin first with the resolution difference. It goes along with common sense that a higher resolution will result in better graphics but how much of a difference will it actually make? Lets take what is probably the most talked about Launch Title on Xbox One: Ryse: Son of Rome. People were dismayed to hear that Ryse will run on 900p instead of Native 1080p (1080p vs 900p). However unlike a PC where you are always sitting inches away from the monitor, a console gaming experience is all about viewing distances. Consider the following simulated examples:

One of the major things resolution affects are hair and minute detail. Notice how the hair are crystal clear on the left hand side while not so much on the right hand side. The upscaled version looks blurred, though not necessarily in a bad way.  Notice other details such as the facial texture which are more elaborate on native 1080p.

Being a member of the PC Gaming community myself i will be the first one to say when you are sitting inches away from the screen your resolution will matter, 1080p will look much better than upscaled 1080p any day. But thing is when using a console you are probably sitting meters away from the screen, in which case the difference between 1080p vs 900p becomes dimmed. Infact realistically speaking only via the Text and other minute details will you be able to tell if its native 1080p or not. Infact the above pictures as they are (minimized) are a good simulated example of how sitting some distance away from these screens should look like.

As you undoubtedly know Ryse got culled from a 150k Polygon Count per Character  to 85k Polygon Count Per Character. Thing is however the law of diminishing returns applies, the developers basically cut down the resource cost by half without sacrificing too much detail. 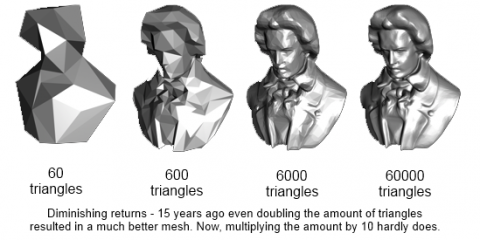 Notice how the first multiplication by 10 yields an incredible difference. Likewise the second multiplication by 10 yields one hell of a difference. However at the third iteration the effect is basically negligible. Meaning in this example after 6k Polygons with size and detail held constant the Law Of Diminishing returns applies. You are increasing Polygons without increasing the quality by the same factor which is bad because resources will be wasted. .

So Now imagine if Ryse Character Count was at 85k how little the effect of raising the count by a factor of just 2 would be. It would be almost Negligible (Note the word Almost) but the resource consumption would increase two-fold. Game design is all about optimization. Sure if you were talking about PC Exclusive Star Citizen which rocks gigantic ships it needs every one of those 7 Million polys per ship, but only because the target object is so large.