Deus Ex: Mankind Deivided, the next triple A installment in Eidos’ cyberpunk-themed first-person action role-playing video game series, is currently in development with an aim to deliver truly improved gameplay as well as graphics on all current-gen platforms, using a new game engine. Latest details from the development team reveal that thanks to the new technology and techniques that the developer is using to handle graphics, the upcoming game offers massive level sizes and locations that are both huge and stuffed with new content. 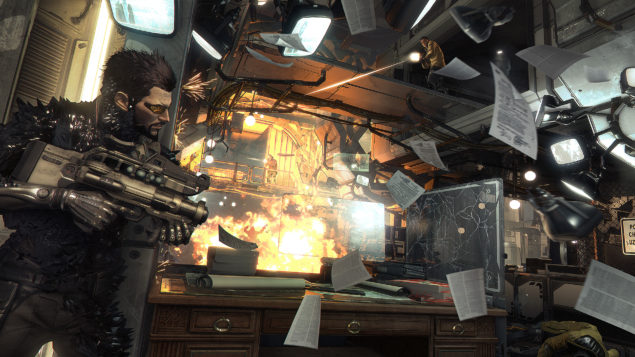 Eidos Montréal Graphics Programmer Nicolas Trudel recently hosted a panel at Game Developers Conference in San Francisco, talking about the technology and the graphic techniques that the development team is pressing into service to deliver the best of everything with Deus Ex: Mankind Divided. A report from DualShockers offers more details on how Eidos Montreal is applying new methods to deal with anti-aliasing, ambient occlusion, and lighting. It also reveals how big and dense locations the game will have to offer.

Talking about the technology, Deus Ex: Mankind Divided d is making use of the new Dawn Engine, which is “a heavily modified version of IO Interactive's proprietary Glacier 2 game engine”, along with a range of middleware “including Umbra, PhysX, APEX, Blink, Scaleform, FMOD, and Nav Power.” The game uses “Tiled Lighting, with Deferred rending for opaque surfaces and forward lighting for transparent surfaces.” The anti-aliasing solution that the game uses is based on a temporal algorithm, and a temporal solution is also being used for ambient occlusion. The developer is also using an improved version of AMD’s TressFX as hair technology.

The improvements in technology have enabled the development team to new introduce indoor and outdoor locations that players will be able to explore as they progress through the game. While not comparable to true open world games, the game’s maps will still be both great in size and packed with a variety of new content. The biggest level in Deus Ex: Mankind Divided comes in at “one square kilometer in size,” and featuring as many as 300 million polygons that are used for “10,000 to 80,000 objects” that will be present at any given time. But of course, not all of them will be rendered at the same time save for only the visible ones.

Full list of locations that Deus Ex: Mankind Divided will feature hasn’t been announced yet, but the Czech capital of Prague has already been revealed as one of the main cities that players will be able to explore. The game, which takes place two years after the event’s of Deus Ex: Human Revolution, is set to launch on PC, PlayStation 4 and Xbox One this year on August 23.