The Apple DEV-Team, A while ago showed a demo of an ipod touch 4G being jailbreaked by the SHAtter exploit. Now the DEV-Team has also managed to jailbreak the new Apple TV 2G which was running on iOS 4.1 using the same SHAtter exploit loaded on PwnageTool. So what is SHAtter anyway? Well its basically a low level bootrom exploit which cannot be patched through a new firmware and in order ro do so Apple would have to introduce a revised hardware for all the current iOS devices. 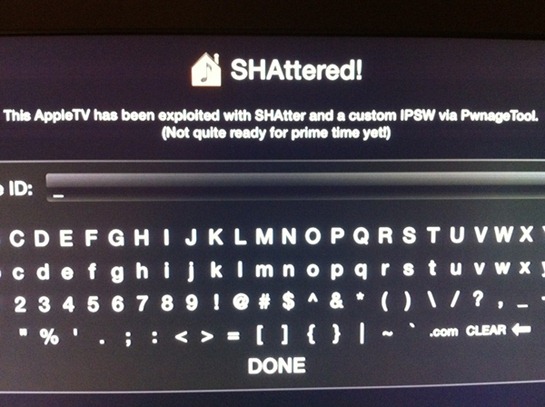 It’s confirmed…SHAtter can trick Apple’s new AppleTV 2G into restoring to a pre-jailbroken IPSW from PwnageTool too!   Literally the only UI application on the ATV is Lowtide.app, but now the window is open for jailbroken apps of all varieties.  (Just like the early iPhone days, the only apps you’ll see on the AppleTV will be jailbroken ones).  In the meantime, here’s a video showing root access (via ssh) into Apple’s new product.

For now the Jailbreak tool is still under way and once its released, There's pwnage coming for all current iOS based devices.