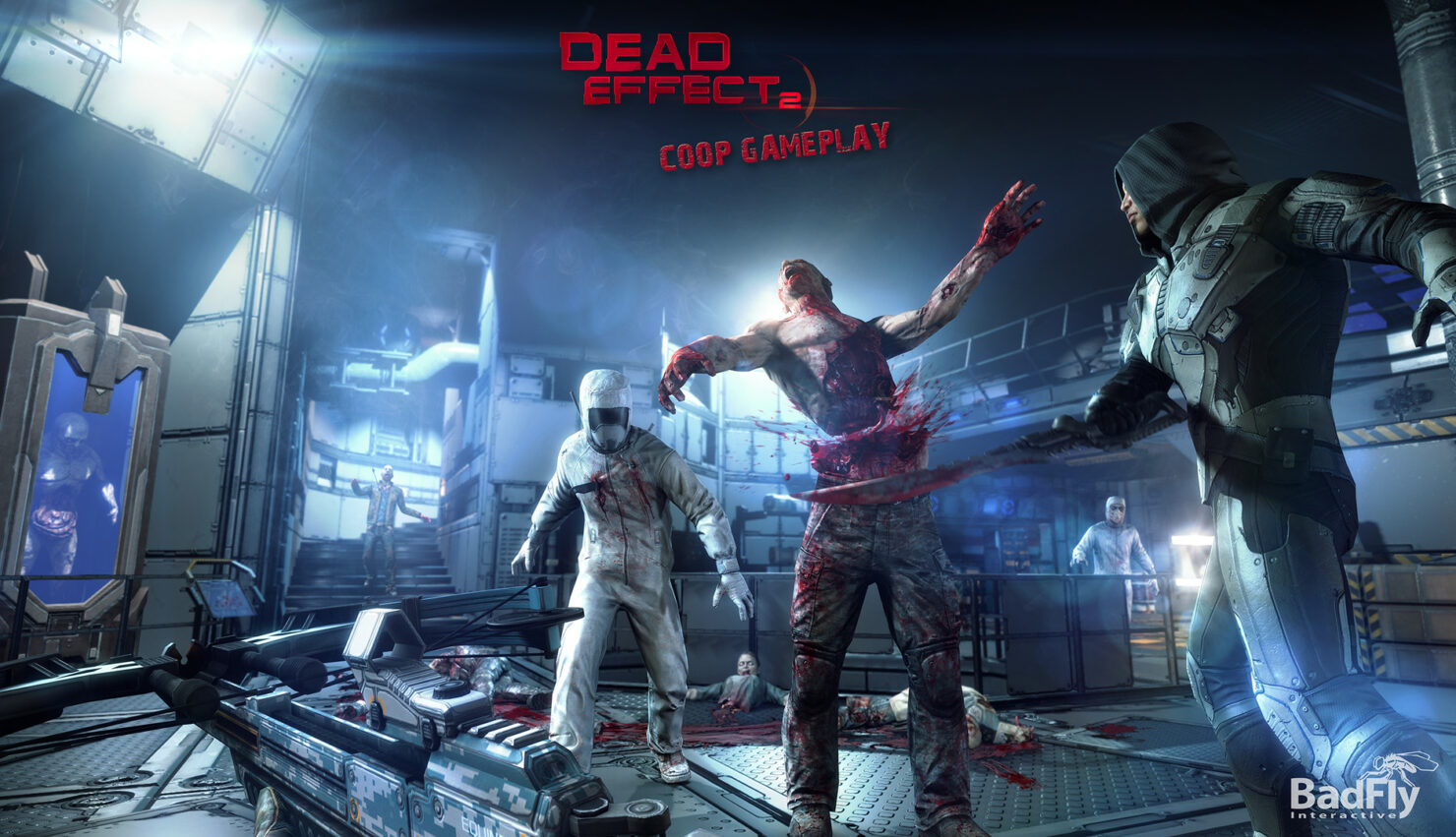 We've had the chance to interview BadFly Interactive's CEO and Creative Director, Lubomír Dykast, about Dead Effect 2, a Sci-fi first person shooter with a particular focus on cooperative gameplay. While the game became available on PC (via Steam) two months ago, it's due to launch on PlayStation 4 and Xbox One shortly. Enjoy!

What would you say are the biggest improvements of Dead Effect 2 in comparison to the first game?

Dead Effect 2 is a lot bigger and ambitious game with far more content. From my point of view, one of the biggest changes is that the game now contains a lot of new types of enemies: from elite soldier, flying drones and various mutants to unique bosses. There's now a melee combat that's fluid, fun, and very rewarding if you can master it (that was one of the features that was requested by our community). We now have a lot more of RPG features as player can customize their characters, select and improve various active and passive abilities and collect various equipment. The number of items in the game surpasses the first game by far – there's now over 100 weapon types and there are hundreds of various armor and implant items including special unique sets. There's no point in describing all the major and minor changes and improvements. DE2 is a much, much bigger game. Try it for yourself and you'll see!

Do you plan to add any more content via DLC? In that case, will it be premium or free?

The current version of the game already contains a lot of content. There are no plans for any paid DLC at the moment, although we have some design documents and content prepared that would significantly improve the game in many ways and that other projects would use as a paid DLC. At the moment our plan is to regularly release smaller free updates containing new missions, weapons, equipment, gameplay improvements and smaller features. We're trying to address reactions of our community and plan new features and changes accordingly. Our community is incredibly important for us as our fans helped us with balancing and improving the game during the early access stage and provide us with a very valuable feedback. We feel obliged to them and want to give them the best experience we can create.

After Dead Effect 2, do you intend to create another game in the franchise or perhaps do something else for a change?

We're already preparing a base for another game. It's not going to be a direct sequel, but it will take place in the same game universe (although significantly expanded) and it's story grows from the events shown or hinted in our previous games. The pre-production phase started almost a year ago and it's definitely something to look for. It's going to be a bit different but it should be very interesting project for any action game fans. You'll learn more later when we'll make an official project announcement, probably at the end of this year.

This is your first foray into console development. What was your experience in porting Dead Effect 2 to PS4 & XB1? Did you encounter any issues with the hardware, such as Xbox One's esDRAM which has been cited by many developers as a bottleneck?

I had some experience with the consoles when I worked on Mafia II in 2K, but this was our first experience with our own console project. It's a bit different, there are new issues and problems that you have to research and master. It's a lot of work and learning, but that's one of the things I like and why I'm making games. Porting of the Dead Effect 2 is still in progress. We have to fight some specific issues and limits of the technology and we're also being more and more limited by the Unity engine. It's solvable but rather complicated and without access to the source codes we're often forced to use not very clear solutions. The problems encountered during the console port was one of the reasons why we're now considering to switch the basic technology and move to Unreal Engine for our next and lot more ambitious project.

What is your target for resolution and frame rate for PS4 & XB1? Will there be a significant drop in graphical fidelity when compared to the PC version of Dead Effect 2?

The versions we're right now tuning and testing are graphically comparable with PC high quality on PS4 and medium for Xbox One, but we're still working and looking for a ways to improve the quality. We want to keep the game at stable 60 fps on both platforms. We were considering the idea of 30fps lock while using a better quality graphics, but we've decided that smooth action play is more important, even if the visuals will have to suffer a bit.

Do you have any plans to make Dead Effect 2 compatible with VR devices, on both PC (HTC Vive, Oculus Rift) and PS4 (PSVR)?

We're now focusing on the port for both consoles. Both are programmers, Jiří Pecher a Jiří Matyskiewicz, were making some VR experiments, but currently we're not sure and we'll have to investigate it more. For a good VR experience, you need rock stable high FPS and also control scheme that works well with VR. We could probably just slap the VR technology on our game and release it, but we'd rather have no VR support than bad VR support. But for our next project we want to support VR from the start.

You will surely have read about the rumors concerning potentially enhanced PlayStation 4 and Xbox One consoles. As a developer, would you welcome more powerful consoles with open arms or perhaps you'd rather not have more platforms to deal with?

Every developer likes to get his product on as many platforms as reasonably possible, with the best possible quality. The enhanced console versions might provide enough power to support the 4K resolution and that would be definitely great. If all we had to do was to create two performance profiles, for standard and enhanced console, we're definitely interested. It would be still a lot easier than attempting to provide enough settings for a wild variety of PCs in the world.