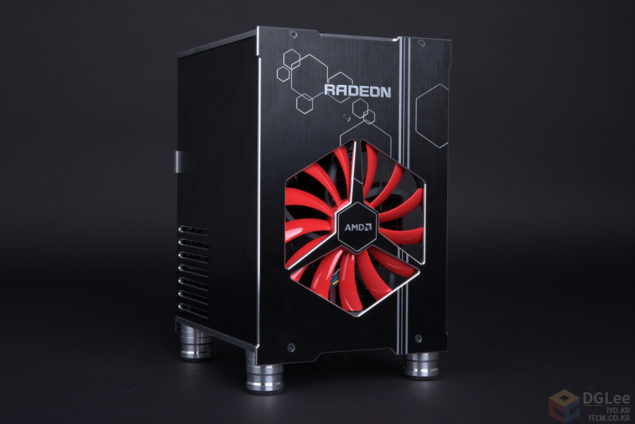 While the AMD Radeon R9 Nano launches in three days, it was actually paper launched on September 1st with most of its information detailed. AMD has been talking a lot about the Nano this week, they even hosted a live stream on Twitch specifically for the Radeon R9 Nano and have a trend titled "MakeItNano" going on over at Twitter. The trend is part of a competition to let followers demonstrate their SFF PC builds for a chance to win the Radeon R9 Nano graphics card. Not all users who are participating in this competition are doing this to win the graphics card but instead, AMD has sponsored their R9 Nano to a several custom builders to demonstrate the unique design approaches one can go with their latest SFF graphics card. DGLee managed to score a Nano graphics card last month and we even saw a bulk of pictures from him and now his latest SFF PC is unveiled, showcasing a new design approach for PCs.

The PC is unique in design but the specifications are even more impressive. The rig which is simply called the Unprecedented High Density Teraflops Machine is made from a enterprise class Intel Xeon processor and an HBM powered Radeon R9 Nano graphics card. The PC includes a Mini-ITX EPC612D4I LGA 2011-3 board from ASRock Rack that can house up to four SO-DIMM DDR4 memory sticks. The motherboard was fitted with the Intel Xeon E5-2699 V3 processor which is the flagship Haswell-EP SKU with 18 cores and 36 threads. The chip clocks at 2.3 GHz base and 3.6 GHz boost clock, featuring 45 MB of L3 cache and 145W TDP. Compared to the Core i7-5960X which has 768 GFlops of performance, the fully AVX/FMA activated Xeon chip has an insane 1324 GFlops of performance. The board is fitted with Micron Crucial DDR4 PC4-17000 16 GB (8 GB x 2) system memory which is enough to power the entire system optimally. Storage includes 3 Toshiba Q300 Pro 256GB SSDs running in Raid 0 configuration.

The graphics card used is an an obvious, the Radeon R9 Nano. Initially, DGLee had plans to use two R9 Nano cards but due to problems in acquiring a PCI-Express spliter cable and making room for the second card, the plan was dropped and went with a single Radeon R9 Nano instead. Even then, a single Radeon R9 Nano packs 8.19 TFlops of compute performance which coupled with the Xeon's 1.4 TFlops rounds off to around 10 TFlops which is impressive for a Mini-ITX setup. The whole PC is powered by a single 600W SilverStone SFX Series PSU (SX600-G) which is also a SFF design and one of the best PSU you can grab within this market. The final setup is listed below:

Now the PC case is a beauty on its own with dimensions of 166mm x 244mm x 188mm (B/H/D), packing a volume of 7.65 liters that is 2.0 gallons in total. 10 TFlops of performance inside this small PC is impressive. Beautiful in design, the case comes with a side mirror on one side, exhaust vents on the other side while both sides have a brushed metallic finish. There's a nice Radeon logo on the front coupled with some hexagons and an AMD logo etched in the center. The Radeon R9 Nano goes up at the top of the case and there are vents cut out exclusively for the card so that the fan can suck in cool air and blow the hot air out of its exhaust vents. The PC is nicely built and will be showcased by AMD during their live Twitch stream on 10th September along with a few other custom rigs.