Double precision is one of the major selling points of the dual GK110 based Geforce GTX Titan Z. However it reports suggest that the new CUDA 7 REL update cripples double precision to a surprising extent (thank you for the tip, Dave Oh) for atleast the GTX Titan Z. Where the card usually reads as 1/3 DP, after the update it falls to somewhere around 1/19 DP. For those of you who employ FP64, this could be a serious work-breaker and we would urge such readers to stick to the current version until we have a lock on this possible bug. 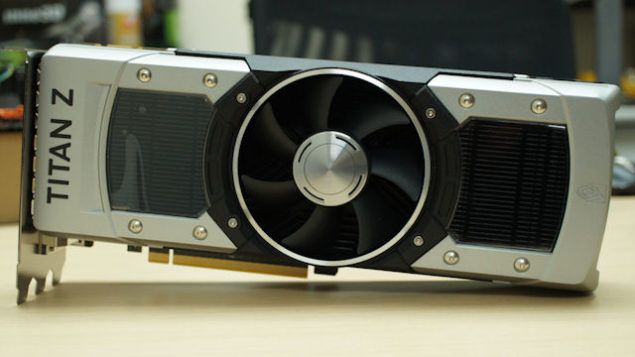 The Nvidia GTX Titan Z poses for the camera. @Unknown

The problem is as of yet unverified and we are awaiting official response from Nvidia on the matter. That said, there is a high likelihood that it could be a one-time bug in the drivers or very particular configurations. In any case, the problem of FP64 being crippled on GK110 based TITAN cards is pretty serious. The entire reason "semi-pros" bought TITANs in the first place was because of the double precision benefit. Without that, the TITAN quickly becomes a glorified gaming card with no 'pro' advantage.

If this problem is not a bug than it would make for a very interesting paradigm shift. It would mean that that Nvidia is subtly but gradually steering its FP64 consumer base to the much more expensive Tesla lineup. As far as the versions go, the CUDA 7 RC version appears to still have DP enabled. If you have installed CUDA 7 REL and had your DP crippled, simply re-installing the drivers won't fix the problem. Using a driver sweeping program might work, but your best bet would still be a fresh install.

Another point to note here is that while we have a confirmed report of a TITAN-Z user, the bug or deliberate cripple could be applicable to other models as well - not just a TITAN-Z. We are going to refrain from jumping to conclusions on what exactly is happening till we receive word from Nvidia HQ, so stay tuned for a follow up when that happens (or doesn't).  For users in the video industry or scientific industry, this is definitely one issue to look out for.