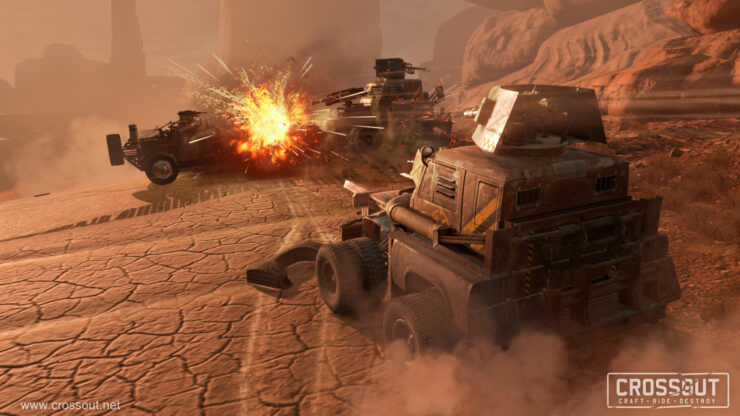 A little over a year ago, we've hosted a beta giveaway for Crossout giving you a chance to try the game. Developed by Russian developer Targem Games and published by Gaijin Entertainment, it's a vehicle-based action online game which debuted on Steam Early Access in August 2016.

Set in a Mad Max-like future where a mysterious viral epidemic wiped out most of the world's population, it allows players to craft their own vehicles with "millions" of possible permutations.

Crossout is due to launch on PC, PlayStation 4 and Xbox One on May 30th and we've talked with Gaijin's CEO Anton Yudintsev to learn more about their future plans and console ports.

Can you tell us a bit more of the Steppenwolfs faction and how will their Howitzers work in practice?

One of the features of Steppenwolfs is delivering high damage from long distance, and Howitzers are perfect for that. Each shot launches 5 shells. Dispersion depends on the range. You need to choose an area on the map and click it to make a shot. It will take 1-2 seconds before the shells reach the area, and they are well noticeable by other players, so the victim has some time to try to get out from the attacked area. Players can use the howitzer 5 times per battle  until it runs out of ammos.

Sub-faction is probably not a correct word. In terms of lore, Steppenwolfs are a part of ‘Brotherhood’ organization, which unites them with Scavengers. It’s absolutely natural for rich and thrifty Scavengers to cooperate with strong and well armed Steppenwolfs, to protect their wealth. In terms of gameplay, Steppenwolfs are a stand alone faction, equal to Lunatics, Nomads and Scavengers. They have their own style, faction parts and blueprints. Later more factions will be added to Crossout and they will form coalitions with the others. Forming powerful alliances is the only way to survive in the post-apocalyptic world and not get swallowed by bigger factions, becoming their slaves.

Do you have any plans for a meta-game of sorts?

We already have a game market which can be considered a meta-game. Game economics are formed by players and ruled by them. Every deal matters and Crossout users love to play on the market, buying cheap parts and selling them later for a higher price when the demand increases. In such a way they can get rare parts in just few days. Not so long ago we have also added clan wars. It’s just the first steps in this direction, in future we plan we develop more opportunities for clans in Crossout.

What are the chances you'll eventually add cabin view, two-wheeled or flying vehicles to the game?

Vehicles in Crossout can be of any size and form, many of them have fully armored cabins without proper cabin view or it can be blocked by weapons mounted on the hood. Adding cabin view would limit the number of possible forms and will make the construction process more complicated.
We don’t plan to add special parts to create motorcycles and aircraft in the near future, but our players have already found the ways to make rides that look a lot like them. You can find the blueprints in the ‘Exhibition’ tab in the game and try them in a test drive.
New factions will be opening new ways of traversing on the battlefield. For example the Steppenwolfes have brought the new mechanic legs, which have high durability and good passability.

Will there be healing between allies?

We haven’t yet planned adding this opportunity.

Can you give us some information on both your short term and long term plans after launch? Do you envision free content to be released alongside paid content?

Our main goals now are adding new factions with unique features and parts and developing various game modes for clans and individual players.

Do you plan to support Linux and/or Mac?

It’s not a high-priority goal at the moment.

War Thunder is one of the few games supporting cross-play functionality. Given that you're working with Gaijin, will Crossout support cross-play too and if not, why?

Was it easy to port the game to PlayStation 4 and Xbox One? Did you have to reduce the graphics quality on either system when compared to PC?

It was easy for us to port the game to PS4, as we have already worked with this console and our team has relevant experience. With Xbox One it was our first experience so it was a bit more difficult for us. We haven’t had to reduce the graphics for any of the two consoles.

What do you think of PS4 Pro and Xbox Scorpio? Will those systems run the game at higher resolution/frame rate?

We have already tried running the game on PS4 Pro in 4k resolution and there were no technical issues noticed. For Xbox Scorpio we are waiting for devkits to try the game on the new console.

Gaijin: Most if Not All Devs Are Ready to Enable Full Cross-Play; Voice Chat Should Also Be Supported on All Platforms