Following the leaks and rumors surrounding the Samsung Galaxy S6 which will be shown off by the manufactured in Barcelona this March, its time for HTC's flagship spotlight today. The HTC One M9 will also be launched by the manufacturer in Spain and is heavily anticipated owing to the manufacturer's overall design prowess when it comes to smartphones. Well, to spice things up, a lsit of apps for the HTC One M9 has been posted by upleaks so now we can take a look at all that can be expected from HTC's upgraded UI on the One M9. 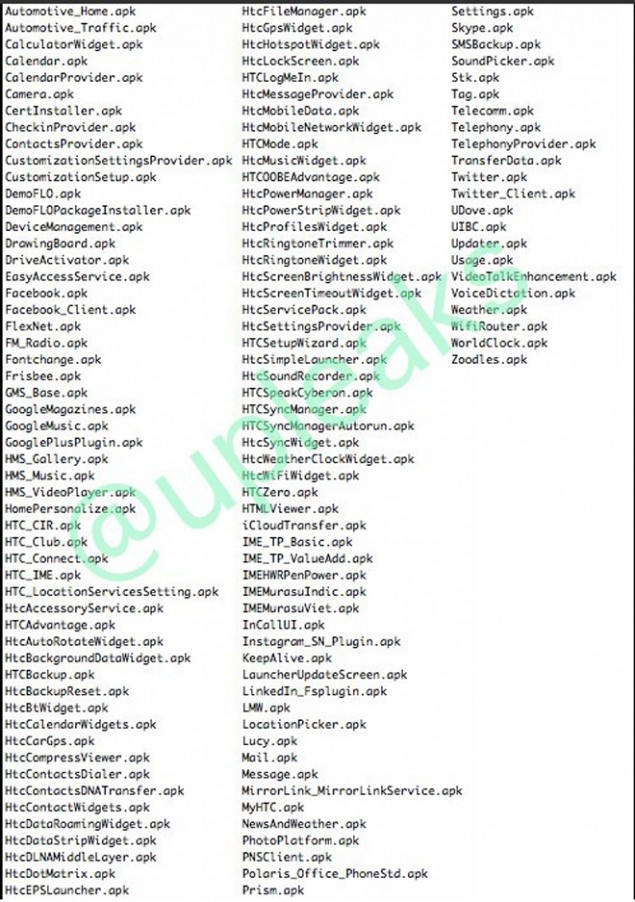 Taking a look at the apps above, looks like HTC's choosing to focus more on visual and performance when it comes to the latest iteration of its UI for the One M9. All the standard apps such as Facebook, Twitter, Google Maps and HTC Connect amongst other seem to have made it on the One M9. So until we receive leaked screenshots of the UI as had been the case of Sense 6 Integration with Android Lollipop or HTC flat out launches the device, there's no way to say for certain what the UI will contain.

That's not to say that we don't have some idea of what updates HTC might be bringing through Sense 7. The UI is rumored to come with an avatar building interface, that should be a pleasant surprise for many users if true. Other specifications for the device are so far rumored to be the Snapdragon 810, 3 GB of RAM and 1080p screen resolution. HTC's also expected to make away with dual cameras on the One M9, with the device anticipated to get a Sony camera sensor with a resolution of 20.7 MP. A;; we can do now is wait for the MWC due to be held in Barcelona, Spain when we can learn more about the device. Stay tuned, we'll keep you updated.