Colorful's latest "Shark Bionic" cooler for its upcoming GTX 670 iGame GPU has been exposed and detailed. The iGame GTX 670 was pictured last month which you can see here.

Colorful with its Shark Bionic cooler once again demonstrates its expertise in GPU designing, Its iGame Kudan series have always amazed enthusiasts with unbelievable designs such as the full passively cooled GTX 680 or the Tri Slot covering Kudan 680 monstrosity.

The Shark Bionic is essentially a revision of the first iGame Shark cooler which was seen on previous generation Fermi GPU's. It features two 80mm fans featuring shark fin design which supply air to the large aluminum fin array underneath. A Copper base dissipates heat to the array which is transferred through nine 6mm pure copper heat pipes.

The all famous Air-Kit heatsink pack is also included which are bundled heatsinks that can be equipped with the GPU to provide better temperatures. Other details include a custom PCB which would feature a GK104-325 core featuring core clock upto 1GHz and 2GB GDDR5 memory.

Launch date and pricing were not mentioned. 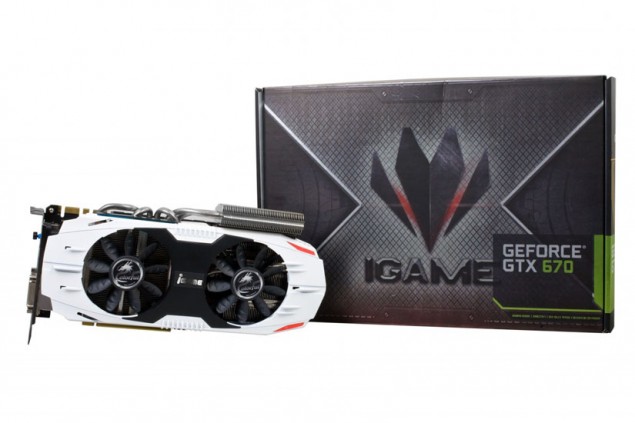