While Intel has confirmed that Skylake processors are launching in second half of 2015, the 100-series chipset based motherboards are no where in sight since mass shipment commences not until early next month. There have been listings of a few Z170 series motherboards which don't reveal much but Colorful has come forward to showcase a design concept of their upcoming iGame Z170 motherboard. 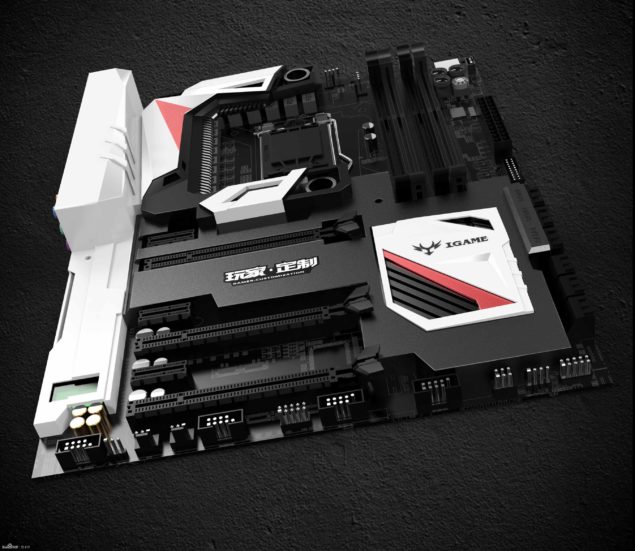 First things first, the motherboard is nothing more than a concept at this stage and may not make its way to retail production at all. Posted over at Baidu Forums, a picture of what seems to be the concept design built around the Z170 series chipset has been shown. The motherboard will feature the LGA 1151 socket that will allow support for Intel's 6th generation processors that are part of the Skylake-S family. The Colorful iGame Z170 will feature four DDR4 DIMM slots which would allow support for up to 64 GB of DDR4 memory at native speeds of 2133 MHz (O.C+).

The PCB seems to be all-black and the socket is powered by a single 8-Pin power connector. The socket is surrounded by a 16 phase power design which is going to deliver unprecedented power and overclocking potential to the processor chip. The whole VRM block is cooled off by a large thermal armor layout which extends throughout the motherboard, cooling off the VRMs, Audio PCB and PCH. The thermal armor also adds durability to the main I/O connectors and the bulky mass of the board. Additionally, the board also has the option to allow liquid cooling through the built-in water cooling inlet which can be equipped with barbs of different sizes, depending on the configuration and make a cross-channel liquid flow to prevent the VRMs from heating up during overclocking sessions.

Storage includes 12 SATA 6 GB/s ports and one can expect a single or even two SATA Express ports on the final design. Furthermore, we have a USB 3.0 header, two USB 2.0 headers and a few accessability buttons on the top-right corner. Expansion slots include three PCI-e 3.0 x16 and three PCI-e 3.0 x1 slots along with a single M.2 interface. The isolated audio PCB has its own chip integrated which might be a successor of the ALC1150 series we saw on the current Z97 motherboards. The details regarding the I/O panel remain unknown at the moment. To be honest, there isn't a huge difference on the new motherboard in regards to technical layout however we can expect some new features.

A few days ago, Intel released their NVM (Express) 750 series SSDs which was a breath of fresh air and innovation in the storage world. Being the first consumer NVMe SSDs, the storage devices boast ridiculous amount of performance at good price points. It can be expected that Z170 motherboards will have full support for the latest NVMe SSDs at launch. We can also expect the latest USB-C / USB 3.1 ports on the motherboards at launch. Some other new features such as on-board game streaming hardware and better audio would be great. Another thing about Z170 series is that they will make a return to the legacy beefy VRM PCBs since much of the voltage regulation that was on Haswell processors will be removed and make their way back to boards. Expect more motherboards to be revealed at Computex 2015 in June.