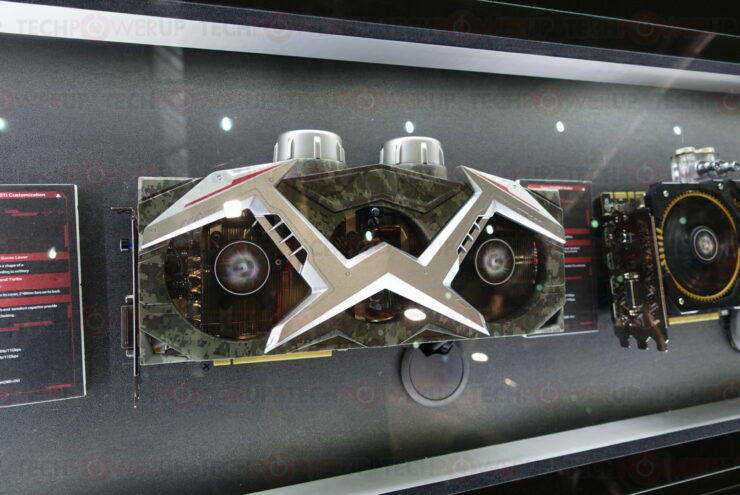 Colorful has just revealed a wide range of high-end iGame products including the iGame GTX 1080 Ti KUDAN and iGame X299-X motherboard. These high-end products are focused at the enthusiast builder and gamer who wants the best performance out of their rigs.

The latest pictures come directly from Techpowerup's Computex 2017 coverage which can be seen here. Yesterday, Colorful unveiled the iGame GeForce GTX 1080 Ti Neptune, a very high-end, liquid cooled graphics card. Today, they are showcasing more impressive products at the booth with one of them being their flagship iGame GTX 1080 Ti design and also an early showcase at their Gaming iGame X299-X motherboard.

The card, just like every other GeForce GTX 1080 Ti graphics card, features the GP102 GPU. The core comprises of 3584 CUDA cores and 11 GB GDDR5X VRAM. There are no words on the core clocks but out of box, the card is clocked at 1480 MHz base, 1582 MHz boost but through a one click overclock switch, these can be pushed beyond 2 GHz with ease. 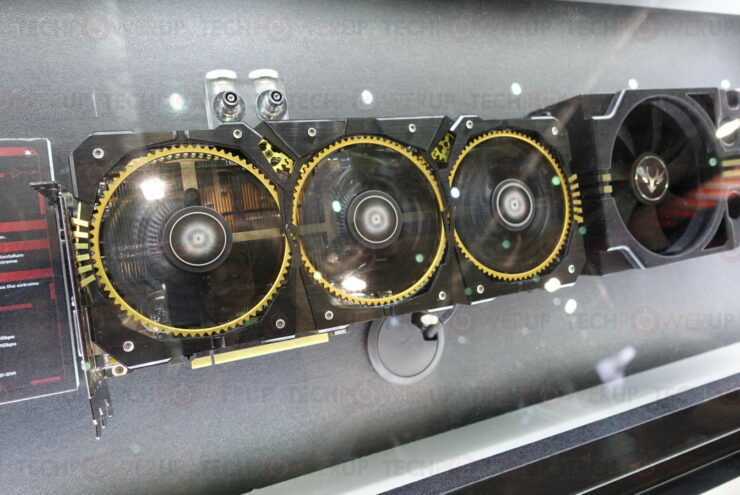 Coming to the design of this card, we are looking at an insane 4-Slot form factor. The card is actually 3-Slot but a separate waterblock that goes on the bottom as a backplate takes up spacing for a 4th slot. This also shows a unique feature of the card which is hybrid cooling. Users can either use the triple fan cooler which houses a beefy heatsink (aluminium-fin) based solution. Or they can attach the card to their custom water-loop for even better cooling performance.

Power to the card is fed through dual 8-Pin connectors which should be enough to power the electrical circuitry on the PCB. It should be mentioned that this card uses a high-performance, custom PCB design which should deliver better overclock performance and stability. Display outputs on the card include 1x DVI, 2x HDMI and 2x DisplayPort. 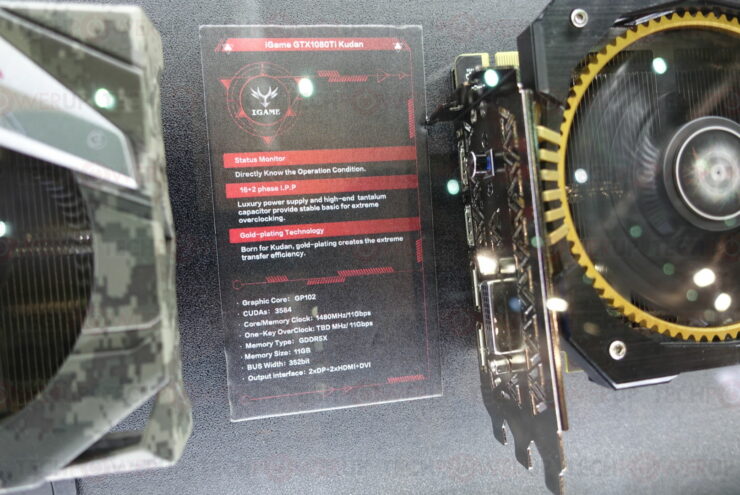 The second card is the iGame GeForce GTX 1080 Ti Customization which is build for case modders. This card actually features a very aggressive design scheme with camouflage theme on the shroud and metallic blades that cover it up. It looks really well built and the heatsink underneath it is a high end aluminum fin based design with multiple heatpipes.

There's no word on the clock speeds of this card either but it comes with stock and OC BIOS. The card measures 2.5 slots and comes with hybrid cooling technology. Display outputs include dual HDMI 2.0, dual DP1.4 and a single DVI port. All Colorful iGame cards including KUDAN, Vulkan OC, Customization and Neptune will retail at premium price points. 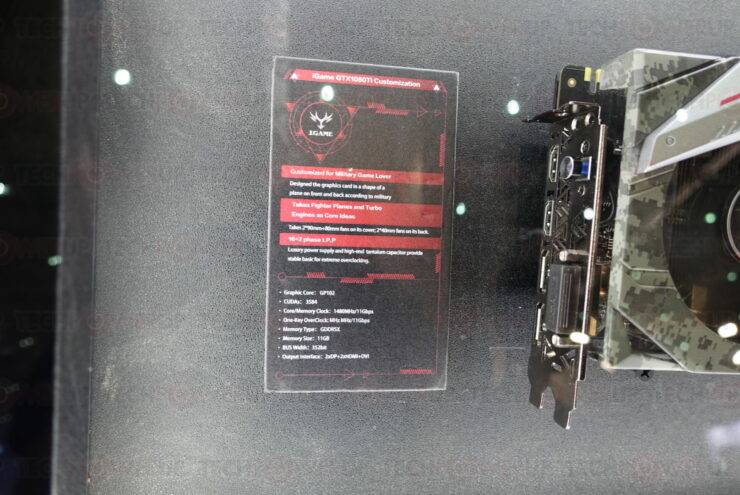 The next product to detail is Colorful's take at a high-end X299 gaming motherboard, the iGame X299-X. This product is actually pretty impressive and comes in both white and black colors along with slight red texturing. The motherboard features the LGA 2066 socket with 10 Phase I.P.P VRM power delivery system. The socket is powered by a single 8 pin connector while the board is given power through the 24 pin ATX connector. There are eight DDR4 DIMM slots which can support a total of 128 GB capacity at really high speeds. 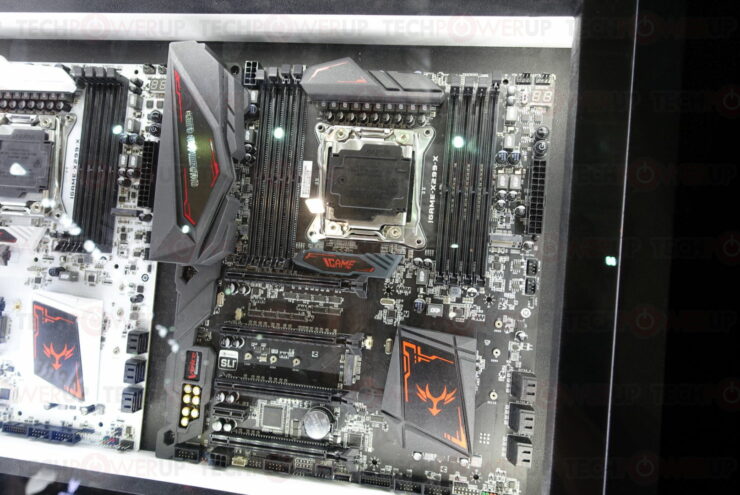 Expansion slots include four PCI-e 3.0 x16, a single PCI-e 3.0 x1 and also a M.2 slot. For storage, the board features 6 SATA III ports, a single USB 3.0 front panel header and also an on board USB 2.0 port. The PCH and VRMs are covered by nicely designed heatsinks and the whole audio PCB along with the backpanel are shielded by the plastic cover. 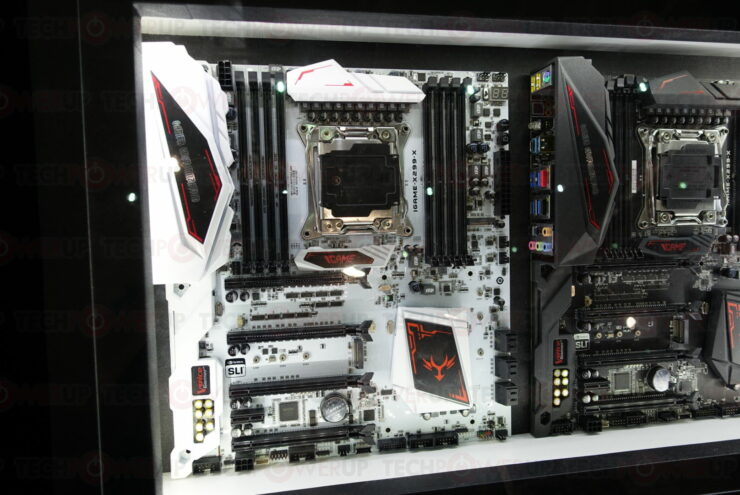 The whole range of products show by Colorful is really high-end and designed for enthusiast and performance minded PC gamers. Expect to see more high-end stuff to be showcased at Computex.