Laptop manufacturer CLEVO could be working on their most insane mobility solution to date. Their yet to launch CLEVO P870X has been listed over at ebay and features desktop grade components that pack a whole ton of performance, making it possibly the world's fastest laptop solution.

The model has been listed by CEG-Hardcorecustom who is a top rated seller on eBay. Pricing is mentioned at $15,853 US which is insane considering you can built desktop PCs faster than this in a lower price point. But since we are talking about laptop form factor, we should be expecting a high price but official prices for CLEVO P870X might be lower.

Starting with the specifications, the laptop packs an unreleased Core i7-7700K processor which is part of Intel's Kaby Lake lineup. This is an unreleased processor and is expected to hit market on 5th January at CES 2017. The model we are looking at here is a full desktop grade part with 4 cores / 8 threads and clock speeds set at 4.20 GHz base / 4.50 GHz boost. CLEVO used an LGA 1151 socket to support the new processor unlike using a BGA based laptop SKU.

Since this model has a TDP of 91W, we expect some high-end cooling mechanism that will allow stable temps of the processor under stock and overclocked settings. The board also comes with 64 GB of DDR4 memory (4 X 16 GB). The memory is part of Corsair's Vengeance XMP series and is clocked at 3000 MHz. The storage is insane too with the package packing 3 2TB Samsung 960 PRO M.2 SSDs and 2 2 TB Samsung 850 Pro 2.5" SSDs. We are looking at a total of 10 TB of SSD based storage here which is more than what we would find on even some high-end custom rigs.

With mighty specs in all other departments, you need the fastest laptop based GPU solution too. CLEVO used two GeForce GTX 1080 (mobility) to power up the graphics side.

The GeForce GTX 1080 is the flagship chip of the lineup. The chip is based on the full GP104 die which houses 2560 CUDA cores, 160 TMUs and 64 ROPs. The chip is the first mobility solution to utilize GDDR5X memory or G5X in short. This memory is clocked at 10 GHz to deliver a bandwidth of 320 GB/s. The memory runs along a 256-bit bus interface. The TDP for the GTX 1080 would be set around 150W since it is a full fledged GP104 core.

A Massive 17.3 4K G-SYNC Display and Tons of I/O Back Up This Beast

P870X features a full color illuminated keyboard with a multi-gesture touch pad. The package comes with 2 330 Watt AC Adapter and an 8-Cell Li-Ion battery pack rated at 89WH. The whole package weighs in at 5.5 KG that is quite heavy compared to other laptop solutions.

CLEVO tried to make the P870X as slim as possible to mark it as an ultimate desktop replacement device. The laptop sure looks good but the insane price tag is going to make it a hard buy. Of course, we should wait for a more official pricing on this insane product. 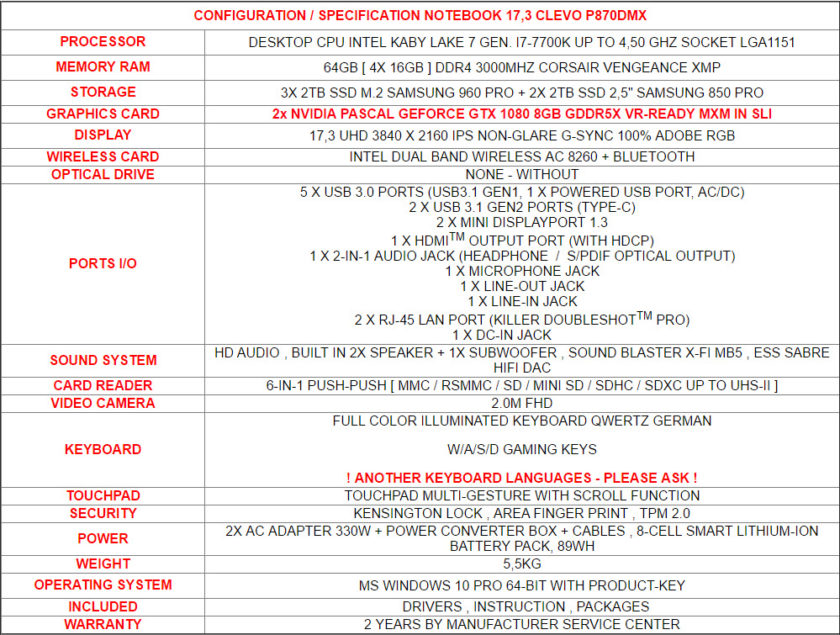