Paradox Interactive announced that the first expansion for Cities: Skylines, titled “After Dark,” will release worldwide on September 24, 2015. 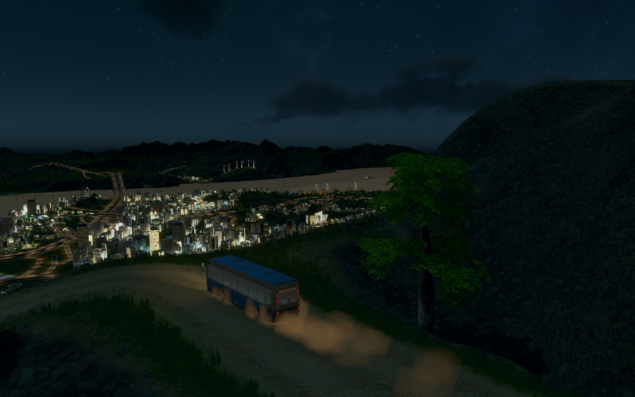 The After Dark expansion will bring a variety of new features to Cities: Skylines including a day-and-night cycle

After Dark will include a variety of new features including a day-and-night cycle, new nighttime city services, options and more. After Dark will be available for Cities: Skylines on PC, Mac, and Linux for $14.99 via digital distributors everywhere.

“In After Dark, the sun will set on mayor-players’ in-game cities – but it will rise once nighttime is over, so nobody needs to worry. Towns will look – and behave – differently at night, with new leisure-focused nightspots, popular beachfront properties that thrive during the daytime and new systems such as taxicabs, prisons, bike lanes and much more.”

“Cities: Skylines will continue to follow the traditions set by other recent Paradox releases such as Crusader Kings II and Europa Universalis IVof paid expansions combined with large updates of free content ensuring that all players, whether they choose to purchase the expansions or not, will have plenty of new features to look forward to. One of the major differences, however, between those titles and Cities: Skylines will be that minor DLC updates will be uncommon. The majority of content updates will be significant upgrades and additions.

Going forward, we will focus on giving away the main features for free and improving the modding tools, while also selling major expansions around new mechanics. But we will also continue to offer free content such as new buildings and road types.”

Cities: Skylines is a modern take on the classic city simulation.

The game introduces new game play elements to realize the thrill and hardships of creating and maintaining a real city whilst expanding on some well-established tropes of the city building experience.

We will bring you any new information on Cities: Skylines as soon as it becomes available.