Rockstar avails itself of its own internal technology assets, and RAGE (Rockstar Advanced Game Engine) to develop the fascinating in-game worlds of Grand Theft Auto video games, and for that, the games have always been pleasing. Instead of using generic game development engines, the multinational game developer adopts a development process that has been organized keeping the requirements of the game in view, the result is a video game series that offers impressive gameplay and visuals. However, what would the ever famous GTA V look like if it was developed in Unreal Engine 4? Here are some screenshots to give you an idea. 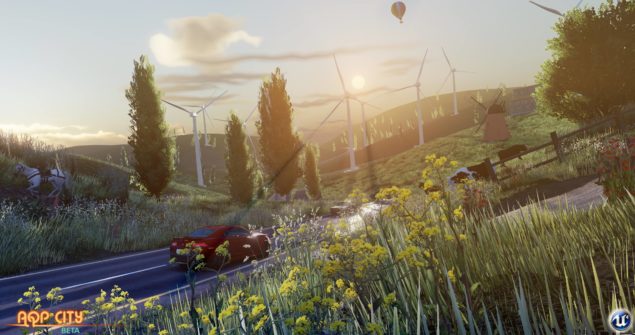 Going through the development process on the sly, APQ City is an indie third-person shooter video game that is based in an open world environment and is largely inspired by Rockstar’s all-time hit GTA V. In fact, it is just not GTA V that the upcoming indie game reflects in its image, developer Jhosep Chevarria Capacoila, who refers to himself as the leader and the environment artist, claims to have put plenty of stuff from a lot of other games into APQ City. According to him, APQ City is “an open world game powered by Unreal engine 4 which combines the features of several video games.” Yes, the game is powered by the well-known Unreal Engine 4. This makes it quite clear, the upcoming indie game is an example of what GTA V could look like if it utilize the potential of Unreal Engine 4.

After going through Alpha phase, the developer recently released some screenshots from beta build of the game, and it looks absolutely stunning. Now, of course, it is not important whether APQ City can top a major release like GTA V or not. The new screenshots of the game showcase pretty in-game environment similar to those of GTA V’s, giving us a good idea about how splendid Rockstar’s latest action-adventure game could look if Unreal Engine 4 was used to put it together. You can check out the screenshots from the beta version of APQ City below.