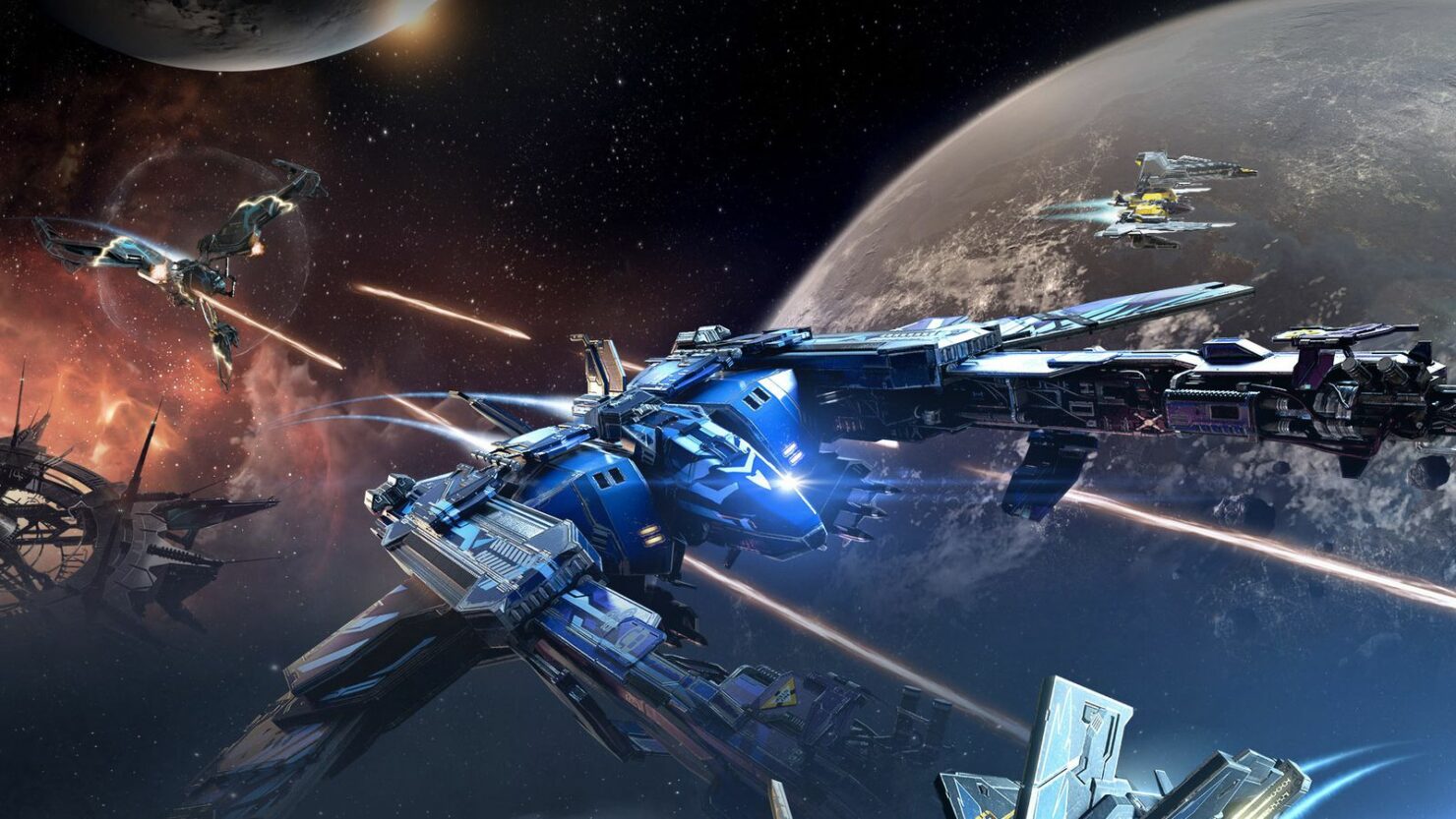 Soon, EVE Valkyrie Warzone will become the first cross-play and cross-reality game on the market. As you might be aware of, EVE Valkyrie launched last year on PC and PlayStation 4, but it was only available to owners of VR devices (Oculus Rift or HTC Vive, PlayStation VR).

Starting on September 26th, CCP Games will remove this restriction with the new free update. Since EVE Valkyrie Warzone is a multiplayer game, this is an interesting challenge for developer CCP Games and one we've explored in our interview with Lead Game Designer Andrew Willans.

The game launched last year on PC and later on PlayStation 4 as a VR-only game. Now, you're opening EVE Valkyrie Warzone to non-VR platforms, too. What was your experience as a VR-only game? Is it too early for the market to go in this direction?

Pardon the pun, but we had a stellar launch on Oculus at the dawn of consumer VR back in March 2016. Similarly, we enjoyed welcoming a very healthy draft of new pilots at the launch of PlayStation VR in October. These were critical milestones for us, and I feel that Valkyrie truly shone as one of the “must have” titles for this exciting new medium. It’s a pretty obvious statement, but players are the lifeblood of any multiplayer game and of course, we always want more for Valkyrie. There are many game features (such as custom matches and spectator tools) which we’ve wanted to develop but the timing (and population) hasn’t been right. So, I don’t think it’s too early for the market to focus on VR as a platform, but those steps need to be taken with careful consideration on how you can grow and maintain a community, and more importantly how players who haven’t bought the new hardware can join their friends that have. Hence the importance of supporting not only cross-play but also cross-reality.

As far as I'm aware, this is going to be the first cross-play and cross-reality game on the market. What kind of steps did you take to ensure a level playing field?

We play. A lot! For the past 7 months, our daily playtests have involved a mix of VR, flatscreen, gamepads, HOTAS flight sticks, mouse & keyboard, and even Oculus Touch. We’ve tuned sensitivities and deadzones to ensure that all the hardware performs to its optimum. We’ve created multiple default input configs so players can quickly find a one that suits their playing style, and even exposed these fields to allow fully customisable key binding. All of this has been developed in parallel with the new ships, ship modifications and abilities. One of our biggest advantages in achieving parity between mouse & keyboard and gamepad is our flight model. In a more traditional FPS style shooter this would be almost impossible due to the speed and accuracy at which you can turn and fire a weapon, but when lining up a shot in a spaceship you usually have to move the craft into position to fire, so this puts players on a level playing field regardless of the input device they’re using.

Can you talk about the new modular progression system you'll introduce with EVE Valkyrie Warzone?

Each ship has 12 modifications (Mods) that can be crafted using XP that is earned from using that ship in combat. These 12 Mods fall into 4 categories – Attack, Defence, Mobility and Tech. You can assign 1 Mod into each of these categories to tune the ship to better match your playing style. For example – a Mobility oriented Mod may increase the acceleration of your ship, but reduce the top speed. Some of the Mods may offer a single value change such as increasing the number of missiles in your salvo, but most present players with a trade-off for the benefit. We were very keen to avoid simply adding all flat upgrades as this could result in a min/max grind to simply unlock all the Mods. We want players to optimise the type of Mods they have applied between battles. Often to compliment the next game mode in the playlist.

What does the new mode, Extraction, add to the game?

In short – a ton of fist pumping, swearing, cheering and OMG clutch saves. It’s just hands down fun that mixes a very simple and clear objective (collect the Relic and deliver it to the Extraction Gate) with the incredible combat we’ve been honing for the past 18 months. The Relic and the Extraction Gate are constantly changing so it really keeps you on your toes. It’s a real test of a team’s synergy as you constantly swing between offensive and defensive roles. Protecting the Relic carrier, or grabbing the Relic if you gun down an enemy that’s currently holding it. Even when we’re spectating a match it has us on the edge of our seats.

Do you have plans to support EVE Valkyrie Warzone with additional content throughout 2018? If so, can you give us any tidbits of information regarding the roadmap?

Absolutely! Our journey with Valkyrie is far from over, and the Warzone expansion is another big step that continues to build on our already solid foundations. There’s not a lot of details I can share right now, but you can expect a greater focus on social tools and features as we make our game available to an even wider audience with the release of EVE Valkyrie Warzone.

From a technical standpoint, are the system requirements going to be much lower on PC? What will it take to run the game at 4K@60frames per second?

VR on PC requires us to run at 90 frames-per-second at a high resolution (around 2916x1620 for decent image quality) which requires high-end graphics card from the last year or two. Tech like NVIDIA’s multi-reprojection support saves performance by rendering the edges of the screen at lower resolution, where you don’t notice the difference. For 2D rendering, the minimum requires are much lower (1920x1080 or even 1280 x 720) at 60 frames-per-second. We’re still locking down the exact minimum-spec, but Valkyrie should run on most medium to high-end DirectX 11 hardware from the last 7 years or so (GeForce GTX 470 and up) and a 3rd generation Intel i5 (Ivy Bridge). As for 4k at 60 Hz, we’re still doing final optimisations and testing so I don’t have any concrete info on that at this stage. In a recent test, we used a 1070 card which ran the game at “high” settings at 4k/60 Hz. So, we’re confident that we’ll see some great results from the top end graphics cards. Watch this space!

Can you disclose the technical specs (resolution, frame rate, graphics settings) on the PlayStation 4/PlayStation 4 Pro side, too?

On PS4 we use a dynamic resolution technique developed by Alex Vlachos at Valve where you change your resolution based on what’s getting rendered on the screen or VR Headset. This is to render the game at high resolution when you’re flying around the map and fall back to a lower resolution when you’re in the heat of battle, where explosions and other effects slow down rendering. On PSVR we render between 1920x1080 and 2880x1620 at 60 frames-per-second, this is true for both the PS4 and the PS4 Pro. The PS4 Pro has extra graphics features like dynamic shadows and improved effects we can’t run on the original PS4.
For 2D we use the same dynamic resolution technique, this lets us run at native 1080p at 60 frames-per-second on PS4 and between 1920x1080 and native 4k (3840x2160) at 60 frames-per-second on a PS4 Pro where a 4k display is available, though most of the time it will be somewhere in the middle. Additional graphics features are available when running at 1080p on PS4 and PS4 Pro compared to the VR versions such as improved effects, shadows and lighting.

Now that there's also a non-VR version of EVE Valkyrie Warzone, what are the odds that we'll see the game on Xbox One in the future?

We’re passionate gamers and creators that want to reach the widest audience possible for Valkyrie, but I don’t have any information about that at this time.