Carmageddon developer, Stainless Games, has announced that Carmageddon Max Damage will be releasing on PS4, and Xbox One. Additionally a PC version will be released as well, and will be free for those who own Carmageddon: Reincarnation. 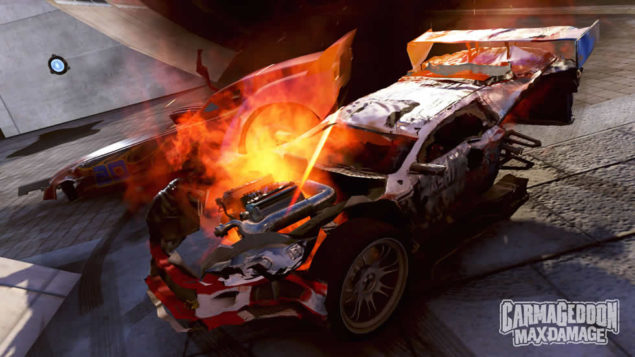 Developer Stainless Games announced the news via their official website alongside an announcement trailer. Check out the violent trailer down below:

Carmageddon: Max Damage presents more carnage and mayhem than ever before, and will be available on consoles later this year. Set in a world of over-the-top violence, crazy PowerUps and non-stop laughs, you play against a bunch of complete crazies in twisted automotive killing machines whose aim is purely to maim you. It’s the racing game where racing is for wimps.

Neil Barnden, Brand Director at Stainless Games Ltd, who created the original cult hits said, “We’re excited that players on these new platforms will soon be able to enter the warped world of Carmageddon: Max Damage, the carnage-filled antidote to racing games!”

Over 30 cool custom killing machines, each with their own highly distinctive character

A host of moving targets to hunt down for points, including pedestrians in wheelchairs & mobility scooters, cyclists, bears and aliens

Fully featured action replay mode; to relive all the action again from any perspective.

… with over 90 crazy PowerUps, complex car damage and repair system, blood, laughs and much, much more.

More info on the next Carmageddon installment can be found at the game’s official website. Max Damage will be the 5th installment in the series. The original Carmageddon released back in 1997, and due to its violent nature, the game was blacklisted in multiple countries.