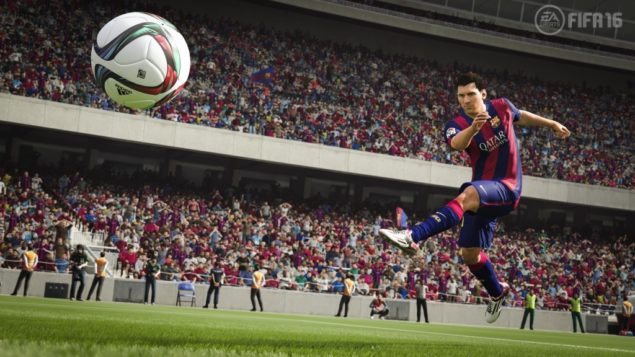 Story: One of the most highly anticipated sports game around the world is the FIFA series. First released back in the year 1993, FIFA was one of the very first games I remember playing and so it goes way back for me. Weather it does so for you or not, we have a new batch of FIFA 16 screenshots we'd like to share with our viewers.

For the first time ever, Electronic Arts has released screenshots of the male version of FIFA 16 and its looks amazing. The game features amazing graphics and you can see characters perform skill moves in the screenshots below. And without further ado, lets take a look at the screenshots.

The game will be hosting the following confirmed game stadiums; "Stade Velodrome and Parc des Princes from FRANCE, Borussia-Park from Germany, King Abdullah Stadium from Saudi Arabia, CenturyLink Field from United States" and more stadiums which EA has yet to announce.

Finally, as previously reported, the game will also women's national teams, about which David Rutter, VP and GM at EA SPORTS FIFA, said:

FIFA 16 will be making its way onto PC, PS3, Xbox 360, PS4 and Xbox One coming September. FIFA 16 is the first game which allows its fans to edit its cover according to their choice. You can place any player of your choice alongside Lionel Messi on the cover of the game in Australia, France, Latin America, Mexico, and the United Kingdom.

Stay tuned for more information on Electronic Arts upcoming addition to the FIFA gaming series and do share your views with us in the comments section.