We knew Borderlands 3 sold very well on PC (where it is only available on the Epic Games store, at least until April), as 2K described the performance as the highest-selling for the label in the initial five-day window. Even Gearbox CEO Randy Pitchford boasted about the concurrent players when compared to previous Borderlands games on PC.

We never got an exact sales figure, though. Now, website PlayTracker has attempted to narrow down an estimate of that by cross-referencing the nine most popular games on the Epic Games store as they were recently revealed by Epic with data grabbed from the Xbox API (on PC).

According to PlayTracker, Borderlands 3 sold almost two million copies, with World War Z a far second at slightly above one million. Metro Exodus sold 700K units, while Control and The Outer Worlds (which is also sold on Microsoft Store, by the way) couldn't even get near to 500K units when combined, which is dismaying considering they are both very good games. 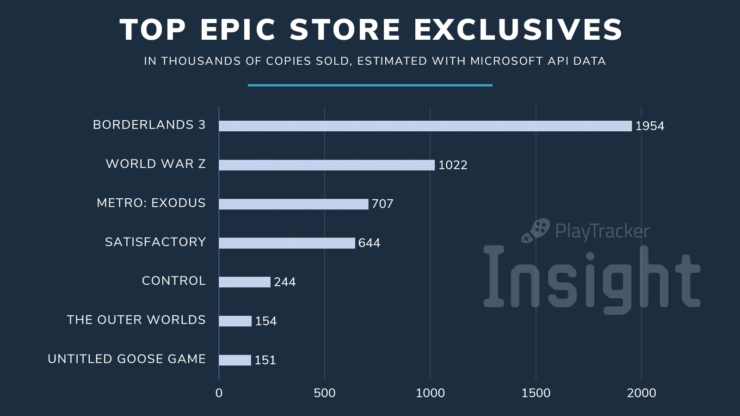 Clearly Borderlands 3 was by far the biggest game on the Epic Games store other than Fortnite. We'll see if anything can top it this year in terms of sales. Upcoming exclusives on the platform include Journey to the Savage Planet (out later this month), Zombie Army 4: Dead War (out in early February), Predator: Hunting Grounds (coming in late April), not to mention Rogue Company, Godfall and Magic: The Gathering, which don't have a release date yet. Others will surely be announced as the year goes by.