Here’s A Blue Galaxy S7 Edge For Your Viewing Pleasure; Samsung’s Still Got Some Juice Left 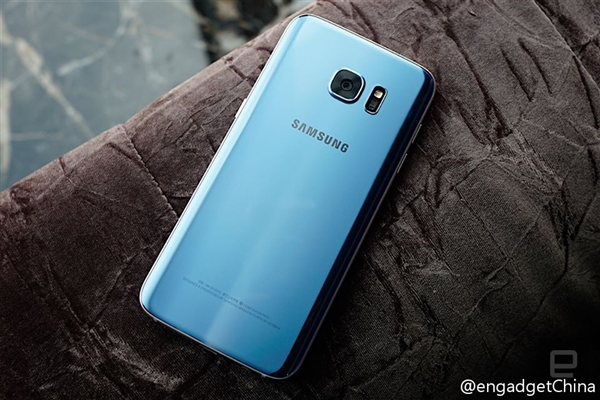 Samsung's upcoming Galaxy S8 has seen some interesting rumors so far. Aside from specifications, we've seen aesthetic details surface as well. While there have been no render or image leaks, other information has been present. For starters, the Galaxy S8 will ditch the flat screen model. Samsung will launch two variants of 5.1 and 5.5 inches, with edged screens. Rumors have also claimed that a blue Galaxy S8 will be launched next year. Speaking of blue, today we see images of a blue Galaxy S7 Edge surface. Take a look below to find out more.

It's been a while since we've seen positive Samsung related news surface. The Korean tech giant has managed to stir up the wrong kind of controversy with the Galaxy Note 7. Its been hissing smoke and catching fire all around and has been subsequently discontinued by the manufacturer. Samsung's really short of options on how to reverse the Note 7's damage. The Galaxy S8 will be launched next year, so there's a lot of waiting involved.

Well, a blue Galaxy S7 Edge might help a bit in this regard. The device was launched a while back and now we've got a first image set. It looks exactly like what you'd expect a Blue S7 Edge to look like. Not much for a retro look, Samsung's blended premium with blue, to produce an overall metallic approach. Specification wise, there won't be any difference from the device launched earlier this year. The price is also expected to stay the same.

Keep in mind that the images above are courtesy of engadget China, so folks over in the US will have to wait for the device. That being said, the S7 Edge has also sen its fair share of controversy. Following the Note 7, we've been seeing quite a few reports of Samsung's flagship smartphone hissing smoke as well. Most of these have occurred when the device had been left charging overnight. Given the general public's tendency to draw needless causation from correlation, Samsung's got some tough brand management ahead.

The blue Galaxy S7 Edge does do justice to the device's overall design. It provides the S7 Edge with a more lighter approach when compared against Samsung's other gadgets. Color options have seen an increased focus this year, as Apple chose to bring Black for the iPhone. Google's color options for the Pixel lineup also add more flavor to the mix. For Samsung, we really have to wait for the Galaxy S8. The Korean tech giant needs to get up fast. For now, take a look at the images and let us know what you think in the comments section below and stay tuned for the latest.