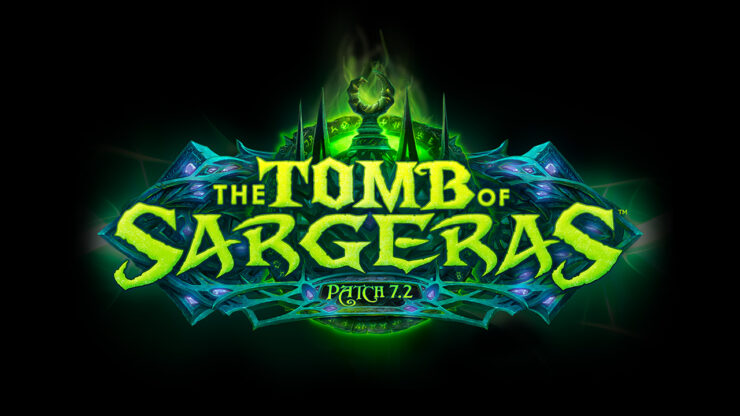 Blizzard has provided details on upcoming content updates featured in World of Warcraft: Legion patch 7.2 and 7.1.5.

Legion’s first update, patch 7.1 “Return to Karazhan” was released only 2 weeks ago, but already Blizzard provided insight in the future of Legion. Unlike previous expansions, Blizzard wants to make sure that Legion offers a steady stream of content.  A new patch structure is being built to deliver updates in various sizes. According to Blizzard, patch 7.1 is considered a patch “in-between”, when it comes to size.

Patch 7.1.5 is being prepared and is considered a “small” patch which will feature rewards, system updates, and evergreen content. Down below you’ll find features found in patch 7.1.5 which will release on the PTR in the “near future”.

Timewalking Dungeons are a good example of “evergreen” content. In this patch, we’ll be adding six Mists of Pandaria dungeons into the Timewalking cycle: Temple of Jade Serpent, Stormstout Brewery, Shado-Pan Monastery, Gate of the Setting Sun, Mogu’shan Palace, and Siege of Niuzao Temple.

The Brawler’s Guild closed their doors for renovations toward the end of Warlords of Draenor, but the staff is preparing to reopen for a new season.

In Patch 7.1.5, we’re introducing dozens of new bosses to test your grit, along with adding a new challenge in the form of Rumbles, which will occasionally trigger and pull spectators into the action to take on a raid boss.

Players will also be able to earn Brawler’s Gold to provide some additional communal benefits for fellow Brawlers and buy new awards for taking part in the event.

Plus, there are shirts. Lots and lots of shirts.

And a basilisk mount.

Unlike holidays like Winter Veil, which run multiple weeks, “micro-holidays” offer brief, holiday-style events with new activities for players to take part in. For example, the citizens of Azeroth might be invited to celebrate a specific moment in their history for just a single day. These events are meant to be activities players can participate in for fun, rather than for game-changing rewards.

With Patch 7.1.5, we’ll be rolling out a variety of micro-holidays with the intent of adding more to them over time. Each one is meant to make the world feel more alive without making players feel like they need to participate for big rewards—while still providing some more variety and fun.

Much like the update to Nagrand Arena, we thought it was time to do a little redecorating in Blade’s Edge Mountain Arena. While we’re happy with the way this map plays, we’ve added a shiny new coat of paint so it looks more consistent with the rest of the world—and we’re introducing a new fun feature. Your battles in Blade’s Edge will now be “shoutcast” by an ogre announcer, who will call out events of particular importance. We look forward to seeing how that turns out.

Legion featured one of our biggest class overhauls yet, and since launch we’ve been listening to feedback from the community and making balance adjustments—but we’ve been somewhat limited in terms of what we could change in our hotfixes and first patch. Most of the changes up to this point have been constrained to hotfix-based numerical tuning. Patch 7.1.5 is when we’re really trying to tackle some of the broader class issues.

We’re taking a look at are talent rows, so we can increase the diversity of talents. For example, in the Barrage row for Marksman Hunters, it feels like there is only one option in the row that you must take regardless of your play style. There’s room for fine-tuning, and we to make it so everyone feels like they can customize their character to their liking.

We’re also looking at the relative weightings of secondary stats such as Haste, Mastery, and Crit. These are often pretty disparate for different specs and this disparity can sometimes make it feel as if an item that should be an upgrade with a higher item level isn’t as desirable as we would like. We want to make sure the gaps between best and worst aren’t so large that they distort gameplay. We’re going to be making a lot of efforts toward that end in patch 7.1.5.

This patch also allows us to make some tweaks to specific rotations, look at how things have played out since Legion, and find where there’s room to improve the overall fluidity and feel of the different specs.

Patch 7.2 “The Tomb of Sargeras” is being considered a “big” patch by Blizzard’s standards, and will introduce the new Tomb of Sargeras raid, a new dungeon, PvP Brawls, the continuation of the Class Order Campaign, and much more. 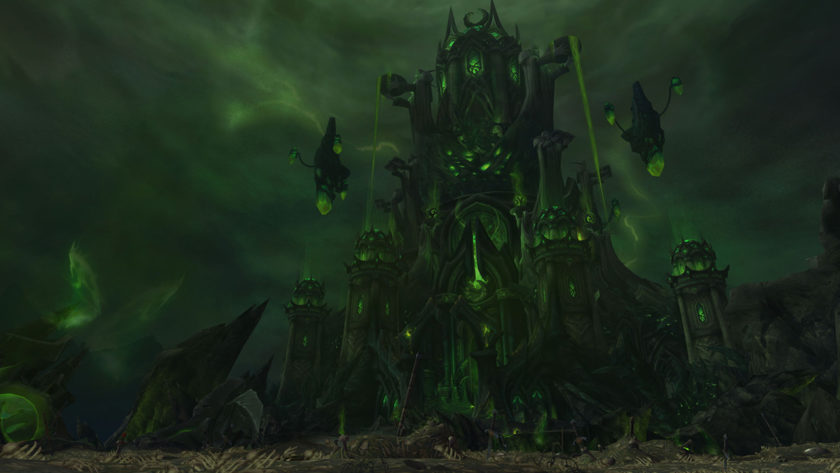 Return to the Broken Shore

The demonic forces of the Burning Legion have built massive structures on the Broken Shore as a base of operations for their assault on Azeroth. It’s here that the Horde and the Alliance experienced a series of tragedies at the hands of the Legion. Now that they’ve regrouped, acquired their new weapons of power, and recruited new allies, it’s time to make a triumphant return.

Where factions failed, the Class Orders will succeed. Each class will continue their Class Order Campaign on the Broken Shore, and a new faction will be introduced: the Armies of Legionfall. Players will take part in helping build the Legionfall base to establish the initial foothold on the island, then work their way through the Legion’s defenses and eventually reach the stronghold.

To do this, the Class Orders will need to work together build up their forces by fortifying ancient elven buildings and upgrading them into one of three buildings—Nether Disruptor, Command Center, or Mage Tower—which will provide additional benefits.

Players will also discover new World Quests on the Broken Shore—along with other new challenges.

Remember the Legion invasions across Azeroth prior to the expansion’s launch? As the fight against the Legion intensifies, new assaults will be unleashed within the various zones of the Broken Isles, and heroes will be implored to thwart them once again. As the assaults intensify, the battle will culminate in a new three-player scenario that takes the fight to the Legion ships above.

If you haven’t been working your way through Broken Isles Pathfinder Part One, make sure you’re well on your way before the introduction of Part Two. Once players have earned this achievement, they’ll be rewarded with Broken Isles Flying account-wide.

What’s even better than flying over the Broken Isles? Flying over them on your own new epic class mount! By completing the Broken Shore campaign and maxing out your Legionfall reputation, you’ll be rewarded a mount that’s unique to your class as a symbol of your dedication to defeating the Legion.

On the opposite end of the Broken Shore, the Tomb of Sargeras lies in wait. Formerly the Temple of Elune, this raid dungeon will contain nine new bosses to conquer. After gaining the fifth Pillar of Creation—the Eye of Aman’Thul—from within the Nighthold, you’ll descend into the depths of the tomb and use the pillars to seal the portal through which the Legion entered Azeroth.

It’s been some time since we’ve added a new dungeon in a patch, so we thought it was about time. Patch 7.2 also features a new four-boss dungeon: Cathedral of Eternal Night. While the raid descends into the tomb, the dungeon ascends into the upper reaches of the spire. You’ll use the Aegis of Aggramar to open the rest of the tomb.

Inspired by other Blizzard games’ Brawl modes, Battleground Brawls will alter the typical rulesets in Battlegrounds. A new Brawl will be available weekly, which will add variety to the gameplay and give players some fun new activities to check out. Here are a few examples:

Southshore vs. Tarren Mill – Dive into this classic large-scale game of team deathmatch.

Instant-Cap Warsong Gulch – You don’t need to protect your own flag. Just grab and go!

Gravity Lapse – Defy the law of gravity in this brawl.

Eye of the Horn – Mounted ram fights are the new PvP.

Artifact weapons are one of the major features of the expansion, with many players increasing their Artifact Knowledge, unlocking new traits, and customizing the looks of their weapons to suit their characters. As a part of Patch 7.2, we’re making a few new system updates to go along with all that.

The first of these updates is the addition of new Artifact traits that can be earned and unlocked via a new Artifact campaign, which you can embark on once you’ve maxed out your Artifact weapon. There will be at least three new traits per weapon, and you can unlock the ability to spend a fourth point on every existing minor trait on your weapon. There will be approximately 15 new traits for players to earn and spend to upgrade and customize their character.

There will also be new Artifact Knowledge levels to make sure there are adequate catch-up mechanics for those who switch between characters, have alts, or are just coming into the expansion a bit late.

For additional variety and customization, we’re adding new relics that modify two Artifact traits instead of just one, so that players can further guide the direction they want their character to progress.

Beyond unlocking new traits, the new Artifact campaign will provide an opportunity for players to show mastery of their class with a solo skill challenge, which will unlock a new appearance for their chosen spec weapon. These appearances have been inspired by previous class questlines that led to weapons like Anathema/Benediction, and Rhok’delar. No grouping required—or allowed—and completing the challenge will reward a truly distinctive appearance.

Even as we’re adding new dungeons, we’re also working to keep dungeons relevant through the entirety of the expansion.

Karazhan offers an opportunity for Mythic Keystones, but at nine bosses, it’s a bit large to fit within the Keystone structure. To address this, we’re splitting the dungeon into Upper and Lower Karazhan. There will be two separate four-boss sections that will fit into the system alongside existing dungeons and the new Cathedral of Eternal Night dungeon. This will bring the total of Mythic Keystone dungeons to 12.

To make sure all Mythic Keystone dungeons are kept relevant, we’ll also bump up the baseline difficulty, along with increasing the item rewards. To go along with this, we’ll also be experimenting with some new affixes on Keystones.

Legion patch 7.2 will be released on the PTR some time after the release of patch 7.1.5.