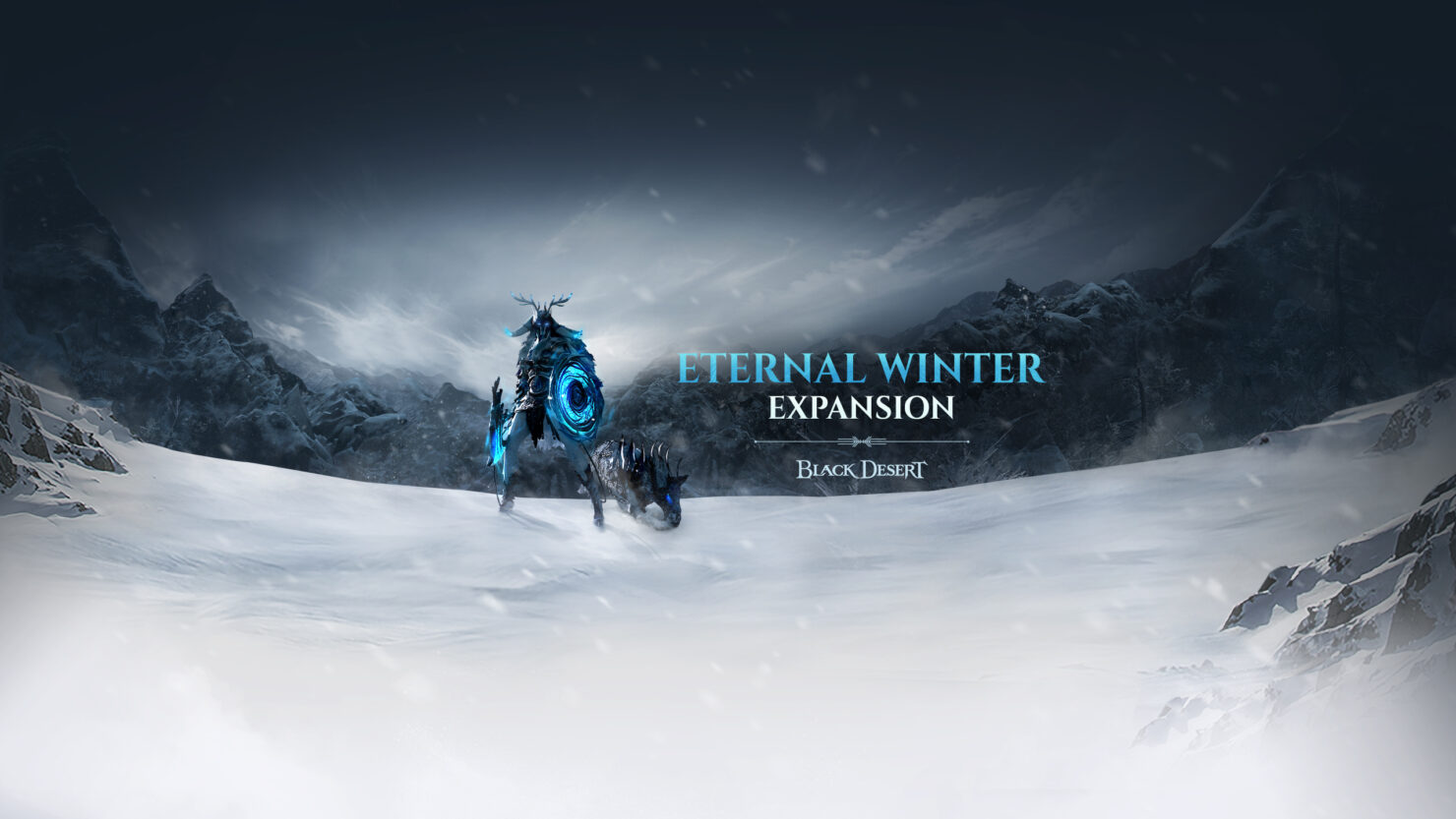 Almost eight years might be a long time for a regular game, but it's not that much for an MMORPG like Black Desert. The debut game of South Korean game studio Pearl Abyss first launched in December 2014 in their home country, though European and North American players had to wait until March 2016 to get their hands on it.

From that moment onwards, Black Desert continued to gain momentum by launching on Steam in 2017, then releasing on consoles (starting with Xbox One) and mobile in 2019.  The game raked in so much revenue that Pearl Abyss was eventually able to acquire EVE Online developer CCP Games.

Last we heard, Black Desert had reached 40 million players and over $1.7 billion in revenue by September 2020, and it's certainly moved even further since. That's more than reason enough to keep updating the game, and Pearl Abyss has recently released the Eternal Winter expansion featuring a brand new mountain region and the Drakania class.

Following this huge free update, we had the opportunity to chat with Pearl Abyss Head of Gaming Design Division Jesse Joo about Eternal Winter and what lies beyond for Black Desert.

You've been working on Eternal Winter for a long time. What were the main goals you had when designing this expansion?

Our biggest goal was “to create a new region that doesn’t exclude anyone.” Since this is somewhat vague, let me explain a bit more about what this means. Whenever an online game releases a new map or region, they normally run a huge marketing campaign to promote it. You’ve all probably seen this happen before. This kind of advertising is aimed at all users, but realistically, only existing or returning players can experience the new content. This is because new content is usually meant for 'end-game' players while new players have to spend time progressing to actually reach the point in the game that they saw in the ads.

Jaehee Kim, the Executive Producer of Black Desert, has always tried to keep this aspect in mind for Black Desert. That's why, when we release new regions, we don’t just fill them with high-level monster zones; we also include monster zones for the mid-game player.
But we felt that that would just come across as half-baked marketing, half-baked new region. Then one day, I suggested, “let’s make a new map that even level 1 players can enjoy!” to my colleagues at the studio. They agreed, and we immediately began our work on development. And thus, the “Eternal Winter expansion that even level 1 players can play” was born.

Upon logging into the game and creating a character, you’re given an option to choose between the ‘Ancient Stone Chamber’ and the newly updated ‘Mountain of Eternal Winter’ starting zone. Then, as is custom for Black Desert, the player wakes up without any memories in a villa in Duvencrune where Nana Margot has been nursing them back to health. There’s also a brief story recap for players who have never played Black Desert before. And although there are monsters in the vicinity of the Mountain of Eternal Winter that are difficult for new players to tackle, you do not encounter any of these monsters during the main questline. Instead, there are quest-exclusive monsters
for players to engage in intense battles with.

Now that Eternal Winter has been out for a while, are you satisfied with the community’s reception?

After the expansion update, we visited many different communities to gather players' opinions. There was a variety of responses, some saying that they really enjoyed doing the main quest, some saying that several monster zones, including the Okjinsini territory, needed improvements, and a lot of other feedback. We hold back from being satisfied or dissatisfied with such feedback. Rather than being encouraged by positive feedback or discouraged by negative feedback, we get inspired to work on the next thing to improve. We wonder how we can make things more enjoyable the next time.

Simply put, we’re always grateful for the players who embark on adventures in Black Desert. With our players’ feedback and opinions in mind, we will continue to work on updates that can make the game more fun to play.

Will the story of Lando continue on?

Out of concern that I’ll spoil things for players who haven’t finished the main questline, I feel like I need to be really careful answering this question. While there is more of the story prepared beyond the current Eternal Winter questline, the Black Desert studio's current focus is revamping the older main questlines as well as working on the new continent – the Land of the Morning Calm. So, as it stands, I’m not sure whether I can say more about the sequel to the Mountain of Eternal Winter questline. I apologize.

When is snowboarding being added to Black Desert?

We are working diligently on it, but it’s taking longer than expected to bring the quality up. To be honest with you, it was finished at one point, but we determined it wasn’t presentable enough for our players. So, we scrapped the “finalized” product and went back to the drawing board. I think we’ll be able to release this content at a surprisingly good time while still being very appealing.

Some users are unhappy with the state of the new grind zones. Are there any plans to improve them or overhaul some old grind zones at least?

Yes, absolutely. We closely survey player feedback. I would say that it’s our duty to fix things to provide a more fun gaming experience. Recently, we’ve been working on the Calpheon Elvia Realm. You can expect an intense and exciting PvE experience as well as valuable loot from it. Additionally, you currently have to select Elvia-specific servers to battle Elvia monsters, but we plan to improve the entry method so that if you prefer, you can defeat Elvia monsters on any server. Not only that, but we’re also preparing to present Marni’s Realm (Personal Monster Zones), which we hope will address the problem of zones being too crowded. Please stay tuned.

Would you consider buffing earnings made in party spots as a way to indirectly promote grouping and PvP activities?

One of Black Desert’s mottos is “a game that’s enjoyable even if you play alone.” This is why, apart from guild content, content is set up in a way that doesn’t force you to form parties. What you’ve suggested is a great way to encourage partying up with other players. However, this may come across as enforcing parties onto solo players. Therefore, we distinguish single-player content and co-op content as two separate things and try to not make the level of rewards too distinct from each other. But of course, Black Desert is an MMORPG, and we are aware that MMORPGs are a genre made more exciting by having other people to play with. For this reason, we are doing our best for players that want to play as parties. Last year, we revamped Node Wars to be more fun and added new PvP content, such as the Valencia Red Battlefield. We also released Black Desert’s first co-op dungeon, Atoraxxion. We are going to continue to try to meet the expectations of both single players and party members. We will approach it in a way that has a lot of fun elements, not just draw a distinction between the two types of players based on PvE profits.

Unfortunately, there isn’t much for me to share as of now. However, I'm really grateful for all our players who show so much love for ocean content.

Are there any plans to update or enhance Guild contents?

I think that guilds play the most important role in user communities. We have some plans in mind for new guild content, and I think we’ll be able to share those ideas with everyone once those ideas are more concrete. One hint I can give is that it’ll be “something new that guildmates can work together to tackle”.

Will there be more NPCs with amity knowledge?

Definitely. A lot of NPCs were added through the Mountain of Eternal Winter expansion. The same goes for the upcoming Land of the Morning Calm, so we hope you’ll look forward to them.

Organized PvE group content is where many players feel Black Desert is lacking compared to other MMORPGs. Are you going to produce more content in this area?

Yes, we will. There are still two zones, bosses, and the final boss Illezra left to be added to Black Desert’s co-op PvE content, Atoraxxion. Once we finalize enjoyable combat after much planning and development, we’ll update this content in-game.

What is the state of the Arena of Solare? Do you plan to launch it on live servers soon?

We’re making steady development progress on it, and we recently released the Arena of Solare prototype on Black Desert Global Labs (testing servers.) With the feedback we receive from there, we will refine the content so that it’s fully complete to be released on the live servers. We greatly appreciate the support and participation of all of our Adventurers.

Is there any major class balance pass coming up? If so, can you share some preliminary details?

We are going to continue class balance patches. We have in-house experienced PvP players in the development studio continuously doing tests, and we gather various feedback from communities from all regions in order to improve the gameplay. Regrettably, I can’t reveal any preliminary details at the moment.

Are there any plans for Black Desert on consoles to fully catch up with the PC version?

One of Black Desert studio’s goals is to provide new content that can be enjoyed altogether by Adventurers worldwide. Though, due to localization work, time differences, and other practical issues, it isn’t perfect. But we aren’t going to just automatically prioritize these things. Above all else, the game should be fun, so updates for consoles are made based on the rate of Adventurers’ progress. With the recent addition of O’dyllita and the upcoming addition of Drakania, the gap between console and PC has been significantly narrowed.

From a tech standpoint, are you going to evolve the engine with features like ray tracing support, NVIDIA DLSS/Intel XeSS support, or AMD FSR 2.0 support?

It’s already been many years since Black Desert’s launch, but even now we continue to improve Pearl Abyss’s proprietary engine. We are always open to considering such features for the engine.

Thank you for playing Black Desert. We at Pearl Abyss hold Black Desert very close to our hearts. We will continue to strive to provide all of our players with thrilling adventures and unforgettable experiences. We hope for your continued support for Black Desert. Once again, thank you.