The benchmarks of the Quad Core and Dual Core Variants  of Nvidia's Tegra K1 SoC have surfaced (for possibly the first time. ) Though we already had a very impressive benchmark of one variant before, this time we have both. However, if what SemiAccurate revealed last week is true, then to put it bluntly, these numbers are not impressive.

The leak source is Hardewareluxx, a site which is usually quite reliable. The benchmarks pit the Tegra K1 SoC (both variants) against the rivals in the mobile SoC industry and show Nvidia's SoC leading with a huge margin. Infact, if you look at the graph ahead you will see both Tegra K1 variants in a league of their own ( and the poor Exynos 5410 on its own too). But like I said before, reserve judgement on that till you learn the actual power draw. 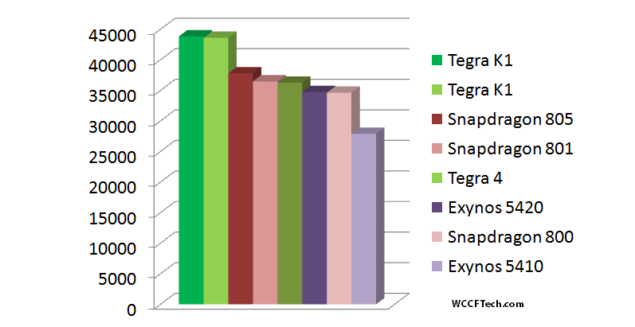 A cursory glance would reveal 3 tiers in the benchmarks. The first tier is occupied by the Exynos 5410 at 27,887 Antutu Points, the first tier containing both the Tegra K1s and the second tier with all the other SoCs.  The higher scoring Tegra K1 is the 4 + 1 variant while as the lower scoring is the Dual Core one.

Now here is the golden question: is this particular Tegra K1 SoC drawing anywhere near the 40W TDP Mark? If so then these scores are nowhere near impressive, infact they are downright disappointing. Ofcoure to be fair, the fact remains that SemiAccurate's revelation is based on an assumption by seeing the Charger (powering the Tegra k1 SoC ) specs. I don't even need to say how much error of margin there could be in deducing wattage from something like that. Ofcourse the GT 740M draws 40W of juice and smokes the Tegra K1 so theres that. It is possible that the module SA saw at the demo booth was in actuality the Vehicle Module and not the mobile based unit. In any case, these are very suspicious circumstances for Nvidia's flagship SoC to be in. But if the SA hype is inaccurate, pardon my pun, then these are good numbers.