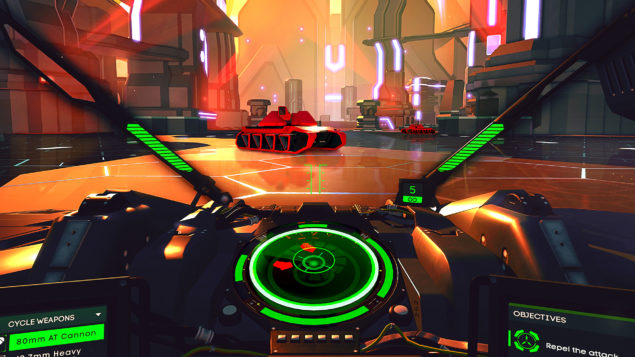 Before you had time to worry that PlayStation VR wouldn't get its fair share of reboots, remakes and remasters, here's a spot of good news: indie developer Rebellion is reviving Battlezone for the virtual reality age.

To be fair, if there was one game that deserved the attempt, this is it. A new campaign trailer highlights this fact as it blends the old and new styles.

But it has to be a game in its own right too, and the developers of Battlezone are pushing procedurally generated and semi-randomized content as their first selling point. No two campaigns will be the same, they say. Environments, levels and mission types are blended together in new combinations for a completely different experience each time.

I think VR has an unfair reputation for just offering cool bitesize experiences, but we want to come out firing and deliver the kind of substantial content early adopters are crying out for.

Obviously we're hoping that Battlezone will be one of the first PlayStation VR games players buy, but we're also designing it to be the one they return to time and time again... once VR has taken over the world of course!

You can read an exclusive interview we had at Paris Games Week with Head of Creative Tim Jones here. The game will launch on PC (Oculus Rift) and PS4 (PSVR).

Battlezone PSVR Runs At 60FPS/120 With Reprojection; Will Have Campaign And Probably Multiplayer