The creative director of Battlefield 4 'Lars Gustavsson', has revealed that the game would officially run at 720P resolution on PlayStation 4 which would be upscaled to 1080P and deliver 60 FPS. It was rumored for quite some time that there's the possibility of Battlefield 4 running at a 720P on next generation consoles and seems like one of the consoles (PlayStation 4) is indeed running at the lower resolution while Xbox One resolution has yet to be revealed.

Being developed primarily for the PC platform, Battlefield 4 would deliver and take multiplayer shooter to the next level with its powerful Frostbite 3 engine and Levolution effects which truly look forward to amaze gamers around the globe. In addition to its revolutionary new effects, Battlefield 4 would also implement improved new multiplayer features such as Battlelog 2.0, Battlescreen and gameplay additions such as Command mode which are a return to the classic Battlefield gameplay.

Lars Gustavsson confirmed that the game originally runs at 720P resolution but is upscaled to 1080P which doesn't means that the same level of graphical fidelity would be provided to players as compared to the game originally running at 1080P HD resolution. Its quite a disappointment that PlayStation 4 even with a larger memory pool and the rumored HUMA architecture could is sacrificing either resolution or frame rate to cope within intense game titles. Battlefield 4 for instance sacrifices resolution for faster frame rates whereas the PS4 exclusive Killzone: Shadow Fall is sacrificing frame rate (30 FPS) for higher resolution. I noted that the multiplayer section of the game is said to be running at 60 FPS which could obviously be running with lower graphics detail otherwise why can't the Killzone developers stick to 60 FPS on the single player too? It isn't much of a hassle and if they wanted to, they could have kept both single and multiplayer modes running at 60 FP. As far as Xbox One is concerned, no words about what resolution does it supports but it could also possibly offer 720P resolution upped to 1080P.

DICE’s General manager has also confirmed that the BETA for Battlefield 4 would be available to gamers to try out in early October. Battlefield 3 Premium and MOH: Warfighter owners would get first access to the BETA early on. 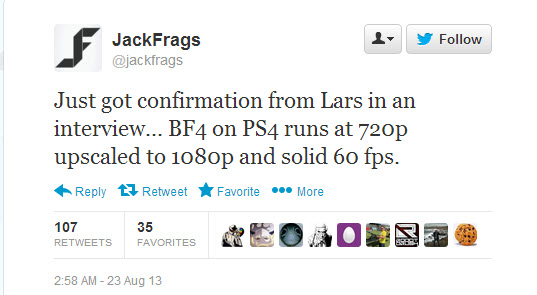