A few days ago during their GPU '14 event, AMD showcased their latest Mantle API built for Frostbite 3 based Battlefield 4 which is the blockbuster AAA FPS to be released next month. We detailed AMD's Mantle API in our previous post which can be found here but left some key details behind so we will try to cover them in this specific article. 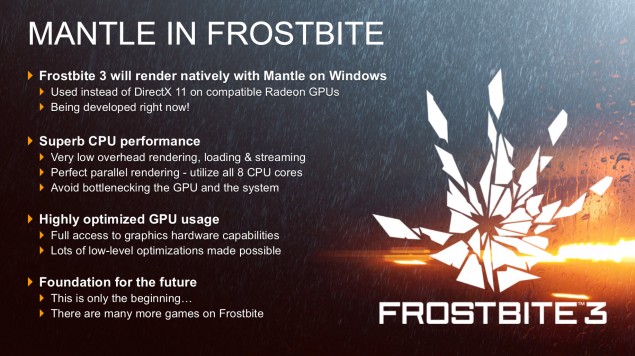 Frostbite 3 Will Support Both AMD Mantle and NVIDIA NVAPI APIs

AMD's Mantle API is currently being integrated in Frostbite 3 based Battlefield 4 which is without a doubt the most anticipated title coming out this year after GTA V. Such is its fame that AMD even bundled their latest and top new Radeon R9 290X graphic card with the new title and those of you lucky enough to pre-order the GPU now would be able to redeem the game at no additional cost. So back to the API talk, currently developers have to operate through DirectX and OpenGL APIs to make games work but this doesn't fully unleash the hardware capabilities of a PC nor do they allow ease of development to developers.

The AMD Mantle API is being exclusively developed for GCN enabled Radeon graphic cards. This would allow developers to dig deep into the metal to bring console-level optimizations through ease of programming and faster optimizations over a coherent GCN chip architecture. This means that we would see better performance on the entire GCN architecture enabled AMD graphic card lineup ranging from the top Radeon R9 290X to the bottom R7 250X.

@bf3forultra we've been using it since BF3 and continue to use it, has a lot of good small improvements and utilities in it

But Frostbite 3 is more than that as John Anderson, the lead guy behind the team at DICE in developing AMD's Mantle API said on his twitter profile that Battlefield 4 would also feature NVIDIA's NVAPI support as it did in Battlefield 3. While the optimizations many not be as great with NVIDIA's API as with AMD's Mantle, its still worth noting that atleast DICE is supporting both the Red and Green team graphic cards which means PC optimizations at both ends. In addition to this, you will have the option to select between using Mantle and DirectX 11 if you are using a GCN enabled GPU. Frostbite 3 is on the road to become one of the new mammoth tech engines in the gaming industry powering a portfolio of 15 AAA titles which include the upcoming: 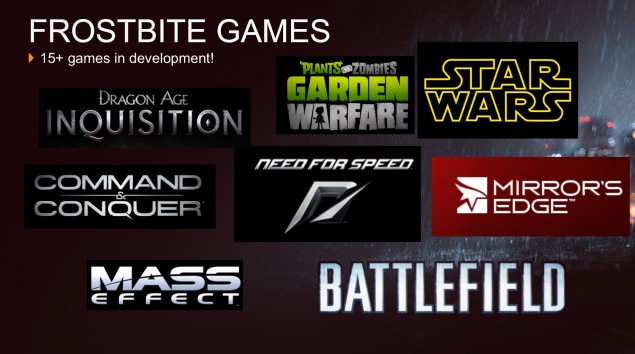 Frostbite 3 has optimizations for the entire PC audience which shouldn't be a surprise since PC is the lead platform for the next generation DICE engine. As a matter of fact, AMD's Mantle seems so interesting that after DICE, the guys over at Activision have also planned to hop aboard and support the Mantle API from AMD. DICE showed a brief video of Battlefield 4 running in Eyefinity that was powered by a single Radeon R9 290X GPU.

We'll have to support #Mantle now; wish it was just #OpenGL extensions though! Maybe someone will lightly wrap D3D or GL around it for us? 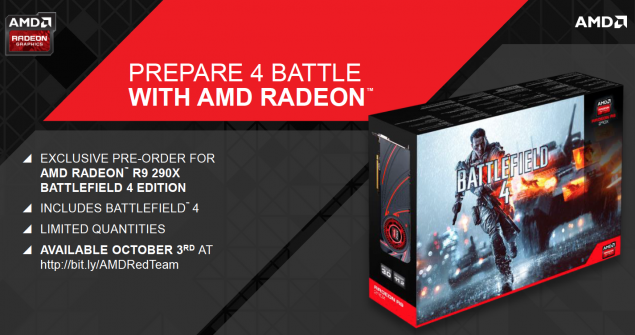 The Frostbite Mantle not only allows GPU optimization but also gives the CPU a boost in performance since very low tasks are handled by the CPU such as rendering, loading and streaming (tasked upon the GPU) so this allows perfect parallel rendering that allows utilization of upto 8 CPU cores found currently on AMD’s FX processors. This also helps avoiding potential bottlenecks for the system that may occur if the CPU is under load which in the case of Mantle won’t happen at all.

.@tistatos_ yup. #BF4 will have a toggle to use Mantle or DX11. would be fair & will be very interesting to compare on different hw setups 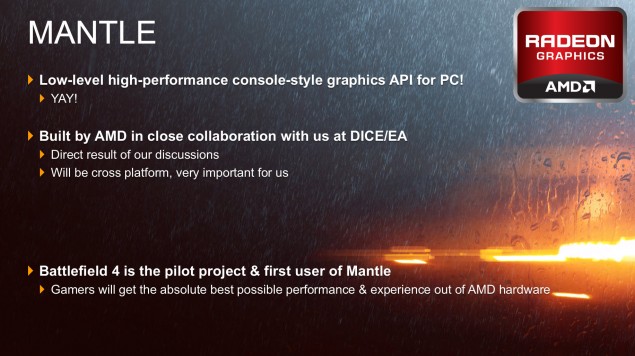 Its clearly mentioned in the slide that AMD Mantle API for Battlefield 4 is just the beginning since there are many more games featuring the same technology for compatible AMD Radeon GCN powered GPUs. Its great news for the PC community and i sure do want to keep an eye out from more information regarding Frostbite Mantle. Additionally, Frostbite 3 or Battlefield 4 in particular would support both DirectX 11.1 and would be fully enabled under 64-bit operation, more on that here. 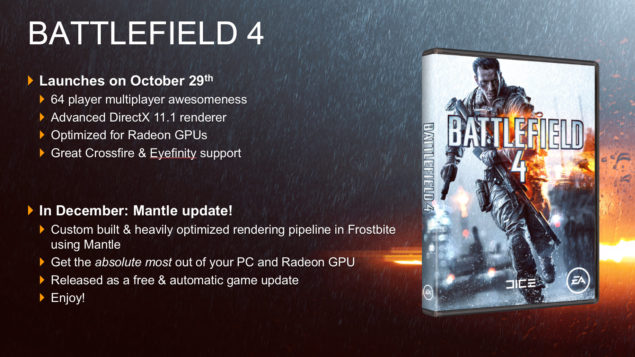