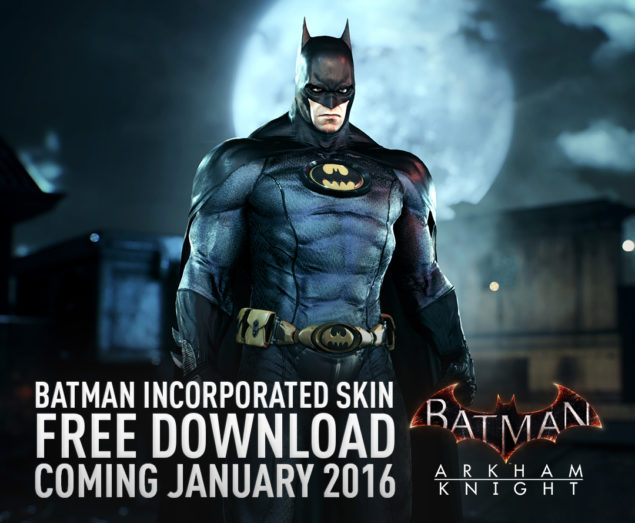 Here’s another little piece of news: also as part of the January update, we’re making the Batman Incorporated skin available to all players. We’re looking forward to seeing even more videos and screenshots of the suit in action.

Warner Bros. also revealed today that the Batman Arkham Knight Community Challenge pack has been renamed to Crime Fighter Challenge Pack #6. The pack will be released on January 19th on PC and on January 26th on PlayStation 4 and Xbox One.

"The festive season is now well and truly behind us and it’s time to look ahead to Crime Fighter Challenge Pack #6 (formerly known as the Community Challenge Pack), coming on 19 January for PC players, and 26 January on console. Members of the community have already found the achievements list and are busy speculating about what they could mean; no doubt these forum vigilantes have switched on Detective Mode in anticipation of the upcoming challenges."

While the name has been changed, the content of the upcoming Batman Arkham Knight Challenge Pack #6 hasn't. The pack will include six challenge maps taken from Batman Arkham Asylum and Batman Arkham City as well as a special endless Predator Mode challenge.

Batman Arkham Knight is now available on PlayStation 4, Xbox One and PC.

Batman Arkham Knight Game Of The Year Edition Revealed By Amazon Germany, To Include All DLC Packs