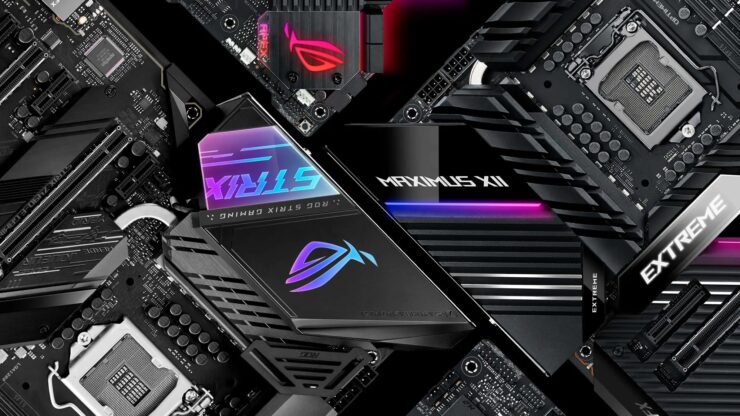 ASUS has announced its next-generation Z490 chipset based motherboard lineup for Intel's 10th Generation Desktop CPUs. Being one of the biggest OEM partners of Intel, ASUS will be offering a range of Z490 motherboards featured in different lineups.

ASUS will be segmenting its product lineup in three categories which include Gaming, Productivity, and Commercial. These segments will have their own unique sub-brands such as ROG Maximus, ROG STRIX, and TUF Gaming for the Gaming segment, while PRIME, Pro Art, and Pro series motherboards would be featured in the Productivity and Commercial segments.

In total, ASUS has 19 motherboards in its Z490 lineup which include 5 in the ROG Maximus, 7 in the ROG STRIX, 2 in the TUF Gaming, 4 in the PRIME and a single board for the Pro Art series. I will start off with the ROG parts first!

The top-chain of the ASUS Gaming lineup is made up of four powerful ROG Maximus XII series Z490 motherboards. The Republic of Gamers lineup has always attracted high-end gaming enthusiasts & this year would be no exception. The ROG Maximus XII lineup features the following motherboards:

Each motherboard has different features to talk, some of them really cool in their own respectful manner and carry different price points for different market tiers. So let's start with the specs for each Maximus XII motherboard.

ASUS has yet to reveal the Maximus XII Glacial but it would feature a design scheme similar to the Maximus XII Extreme but with a custom water block fitted on it for an open-loop cooling solution. The specifications for the Maximus XII Extreme are quite intense as we are looking at VRM that consists of 16 Infineon (TDA21490) power stages which can handle up to 90A, 45A Microfine Alloy Chokes and high-quality Japanese capacitors capable of over 10,000 hours. This 16 phase VRM is powered by dual 8-pin connectors which provide power to the PWM unit and the LGA 1200 socket itself. ASUS states that they don't rely on doublers like other manufacturers for its ROG Maximus XII VRM hierarchy, offering better support for Intel's mainstream high-core count platform.

Other specifications include four DDR4 DIMM slots which can support up to 128 GB capacities with speeds of up to 4800 MHz+ (32 GB capacities operate at DDR4-3600 CL16 with Optimem III). The board makes use of an 8 layer PCB, and advanced thermal solution that covers the entirety of the motherboard. The Aluminum I/O cover is, in fact, a very large heatsink that covers the entire VRM section and is interconnected by a large diameter heat pipe that runs all the way from the top VRM area to the PCH heatsink. There's also an aluminum heatsink cover near the PCIe slots which provides cooling to the M.2 slots. ASUS uses high conductive thermal pads to ensure that heat is transferred to the heatsink blocks effectively.

Looking at the design of this motherboard, there are several key features to talk about such as the stunning black and silver chrome design with a large ROG Eye logo etched over the PCH heatsink. The motherboard also comes with a 2" Livedash OLED display which resides in the middle of the board and will show information such as clocks, temps, voltages, etc. The board features 2 PCIe 3.0 x16 slots, a single PCIe 3.0 x4 slot, and a total of 4 M.2 slots, two of which are cooled by the aluminum cover heatsinks & two on the DIMM.2 module which is shipped with this motherboard and houses its own heatsink.

You can also find a BIOS flash-back and a Clear CMOS button on the rear panel which is a must-have for ASUS ROG series boards along with the various tuning switches and buttons on the PCB too. The motherboard offers a total of 8 SATA III ports. The ASUS ROG Maximus XII Extreme will have a price of $749.99 US at launch which puts it in the enthusiast category.

Moving over to the formula, we see a similar design as the Extreme but in the ATX form factor. The ASUS ROG Maximus Formula motherboards have been regarded as the best solutions for custom-loop builders as they come with water blocks placed over the VRMs. The Maximus XII Formula is no exception, featuring the latest Crosschill EK III water hybrid cooling solution which has layers upon layers for best cooling performance for the VRM. The VRM heatsink consists of an extended heat pipe design that transfers heat to the copper water channel layer which is cooled directly by the liquid. The block users G1/4" threads and come with a watertight rubber gasket which should help prevent leaks.

The motherboard makes use of a 16 phase power delivery (no doublers) rated at 70A and houses the same ASP14051 PWM controller as the rest of the ROG Maximus XII series motherboards. The CPU is powered by an 8+4 pin connector configuration. For storage, you get 6 SATA III ports and for expansion, you'd get 3 PCIe 3.0 x16, a single PCIe 3.0 x1, and 3 M.2 slots (1 x 22110 & 2 x 2280). It comes with the same networking capabilities of 10G/2.5G along with WiFi-6. There are a total of 19 USB ports and a single front panel 3.2 Gen 2 x 2 header. The motherboard also has cooling for the M.2 slots in the form of heatsinks and a full cover design that engulfs the entirety of the board. We can expect the Formula around the $499 US price range.

The ASUS ROG Maximus XII HERO (Wi-Fi) is the most cost-optimized Maximus variant, coming in at around $399 US price. This motherboard would feature the same design hierarchy as the rest of the Maximus motherboards but in a more effective manner to reduce costs. The HERO supports a 14+2 phase VRM configuration rated at 60A and is powered by an 8+4 pin connector config. There are 6 SATA III ports while the expansion configuration includes 3 PCIe 3.0 x16, 3 PCIe 3.0 x1, and 3 M.2 ports.

In terms of I/O, you get a 5G (Aquantia AQC111C) ethernet port and a 1G Intel I219-V Ethernet port. There are a total of 17 USB ports to be found on the board with a single front panel USB 3.2 Gen 2 x2 port. You also get SupremeFX S1220 audio and a TB header on the motherboard. All three M.2 slots are cooled by heatsinks and you can find ROG specific features such as the power, reset, clear CMOS, and BIOS flashback buttons. Overall, this seems to be a solid board for most people who will be upgrading to the 10th Gen platform.

Finally, we have the ROG Maximus XII APEX, a motherboard designed specifically for overclockers and features the same 16 phase VRM array as the ROG Maximus XII Formula but with power that will be provided through dual 8-pin connectors. The motherboard has the most unique design of all the ROG Maximus XII series boards, with an X cut around the PCH. The board has two PCIe 3.0 x16, a single PCIe 3.0 x4, a single PCIe 3.0 x1 slot, and 3 M.2 ports. The Maximus XII APEX has been designed specifically for overclockers and has the highest supported DDR4 spec out of the box, rated at DDR4 5000 MHz. The motherboard only features two DIMM slots, optimizing CPU IMC for faster memory clocks and supports up to 64 GB capacities.

You do miss out on some of the fancy features like dual ethernet LAN but the 2.5G (Intel I225-V) should do the job for most overclockers. The board also gets 18 USB ports, 1 USB 3.2 Gen 2 x2 front panel header, a Thunderbolt header, and 8 SATA III ports. Audio is provided through the SupremeFX S1220A audio chipset. There's WiFi 6 on this motherboard which is a plus point but you could final several tuning switches on this motherboard, allowing a range of options for overclock enthusiasts. The motherboard should cost somewhere in between the Maximus XII HERO and the Maximus XII Formula.

Next up, we have the ASUS ROG STRIX series lineup which is the largest of all other, consisting of 7 motherboards. The ASUS ROG STRIX series based on the Z490 chipset has several offerings that are designed with gamers in mind. The design of all of these motherboards is flashy and has large rog and STRIX branding over them. The lineup includes the following boards along with the top Z490-E model so let's begin!

There are up to 17 USB ports and a single USB 3.2 front panel header (Type-C). All ASUS ROG STRIX Z490 motherboards feature SupremeFX S1220A powered audio. The designs of ROG STRIX boards do not vary much with the primary changes being the I/O. The Z490-E is also the only motherboard to feature a Q-code for debugging in the Z490 ROG STRIX series. The motherboard will be priced at $299.99 US at launch.

The ASUS ROG STRIX Z490-F features a 12+2 phase design and feature support for DDR4-4600 MHz memory. The board features all of the same specs as the ROG STRIX Z490-E but comes with less IO such as 15 USB ports and no WiFi 6 option. Users can add their own WiFi cards in the M.2 E-key but that's about it. You do get a Thunderbolt header which is great. The heatsink design is also kept the same as the Z490-E. The motherboard will be priced at $269.99 US at launch.

Moving on to the Z490-A, we get the same VRM design but different expansion and I/O options. The motherboard carries 3 PCIe 3.0 x16, a single PCIe 3.0 x4, a single PCIe 3.0 x1, and dual M.2 slots. It also comes with HDMI 1.4 and DP 1.4 while the other two ROG STRIX (E/F) boards feature the HDMI 1.4b and DisplayPort 1.2 ports. There's also the reduction of the heatsink to non-extended design.

The Z490-G is slightly more cut down and has the lowest cost of all ROG STRIX boards. This is mainly due to the reduced expansion ports from the Z490-H, featuring 2 PCIe 3.0 x16 and a single PCIe 3.0 x1 slot. There's also no Thunderbolt header but the motherboard does come with a front-panel USB 3.2 Gen 2 header. The Z490-G series will be available in two options, a WiFi one and one without it. The WiFi variant will feature the same specs along with the added Wi-Fi 6 controller while the non-WiFi model will not even feature the M.2 E-key to support a 3rd party WiFi card. Both will be featuring an mATX design.

The ASUS ROG STRIX Z490-I is without a doubt the more interesting option aside from the ROG STRIX Z490-E. This motherboard will feature an ITX form factor and include an 8+2 phase VRM design which would not only feature an extended heatsink design with heat pipe but also an active cooling solution offering up to 12C lower temperatures. The board will be powered by a single 8 pin connector. There is a single PCIe 3.0 x16 slot but two M.2 slots on the board (one on the front and one on the back). Both M.2 ports will feature heatsink cooling.