The ASUS ROG Z170 motherboards have finally been unveiled, showcasing the new design schemes that will feature full support for 6th generation processors. The ASUS ROG Z170 lineup is part of the Republic of Gamers brand which are built for enthusiast gamers that want the best performance that their money can get. The four motherboards featured in this lineup are aimed at all sorts of gamers and today, we will talk about these new 100-series chipset based products from ASUS. 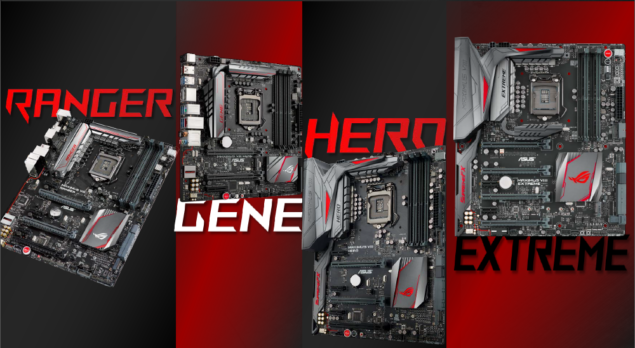 ASUS is introducing several motherboards based on the 100-series chipsets but we are specifically going to talk about just four. What's so special about the four boards we are talking today? All of these boards feature Z170 chipset and support Skylake processors but these boards are also part of the ROG family. In fact, these are the eight iteration of the ROG Maximus family hence the MAXIMUS VIII in the branding. All four boards being part of the ROG family feature the best and quality components that are aimed towards hardware enthusiasts and gamers. These four products include the flagship, ROG Maximus VIII Extreme, the performance Maximus VIII Hero, the compact Maximus VIII Gene and the mainstream Maximus VIII Ranger motherboards. Let's talk in full detail about these new motherboards. 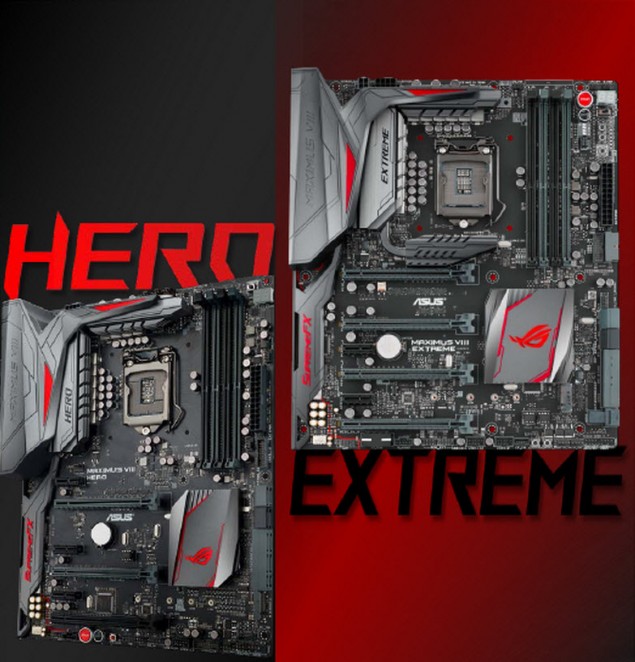 Starting off with the flagship ROG Maximus VIII Extreme, we are looking at a beast of a design with a full silver metal and red color scheme that looks great on the black PCB. The motherboard features the LGA 1151 socket that supports 6th generation Skylake processors and is powered by a 8-Pin and 4-Pin power configuration. The board is supplied power through the 24-Pin ATX connector. On the PWM, we see a 12 Phase DIGI+ VRM that is surrounded by a large heatsink that incorporates heat pipe cooling for stability while operation and even under overclocks. Four DDR4 DIMMs offer support for 64 GB of memory with speeds of up to 3400 MHz (O.C+).  The motherboard is loaded with tuning buttons and switches along with voltage check-points for overclocking and tuning.

Expansion slots include four PCI-e 3.0 x16 (x16/x8/x8/x8 electrical), two PCI-e 3.0 x1 aand a single M.2 NGFF SSD slot. A PEG connector adds more power to the board when it is loaded with several expansion cards and graphics cards. There's a PLX chip hidden beneath the heatsink to the bottom of the LGA 1151 socket which adds more PCI-E lanes. Storage includes 8 SATA III 6 GB/s ports, two SATA Express ports and a U.2 SSD port that leads to a Mini-SAS connector to connect to NVMe SSDs. On top of the ports are two USB 3.0 internal headers with one right angled headers and at the bottom, we can see the Dual BIOS's and two USB 2.0 internal headers. We can also see SupremeFX audio system powering the on-board audio on the Maximus VIII Extreme which is going to drive the 7.1 channel audio. The whole I/O is covered in a protective armor which looks cool.

The ROG Maximus VIII Hero is a more toned down version of the Maximus VIII Extreme that retains the color scheme and the protective armor. The LGA 1151 socket is powered by a 8-Pin connector and the CPU socket is surrounded by a 10 Phase DIGI+ VRM. Four DDR4 DIMMs offer 64 GB memory support while expansion slots include three PCI-e 3.0 x16 (x16/x8/x8 electrical), three PCI-e 3.0 x1 and a single M.2 SSD slot. Storage options include 8 SATA III 6 GB/s ports and two SATA Express ports rated at 16 GB/s. Two USB 3.0 header is found on the board along with two USB 2.0 headers. I/O includes Supreme FX powered 7.1 channel audio jack, USB 3.1 Type-C ports, 6 USB 3.0 ports, two USB 2.0 ports, HDMI 2.0, Display port and a LAN port. This board will be priced lower than the Extreme with a price of $220-$250 US. 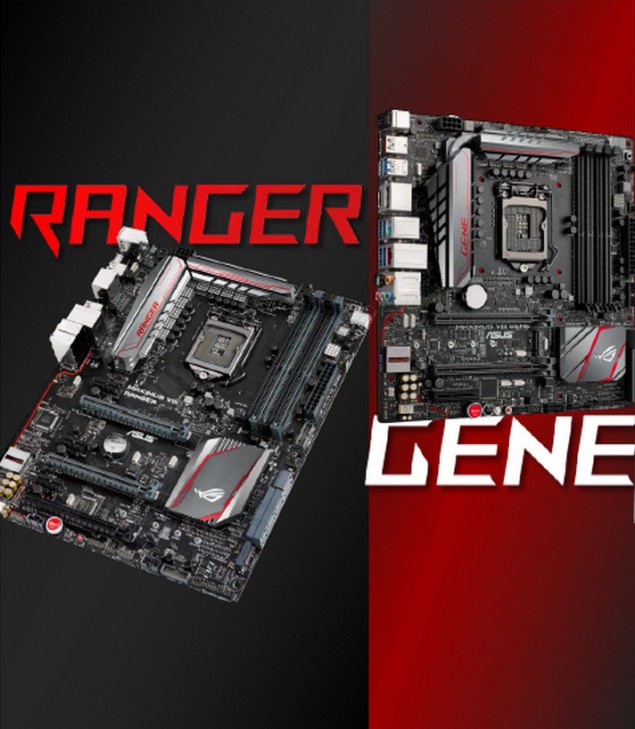 The ROG Maximus VIII Gene is the Micro-ATX form factor motherboard of the ROG lineup. This motherboard being small in size, keeps things on the extreme level with its loaded design scheme. The LGA 1151 socket is powered by a 8-Pin power connector. A 10 Phase DIGI+ VRM that comes with high-end components and black capacitors drives the CPU to its limits and is cooled down by a heatpipe based heatsink solution which blends in with the design nicely. Four DDR4 DIMMs offer support for 64 GB memory (3400 MHz O.C+). A few OC switches can be found to the bottom of the board with the diagnostic LED allocated in the top-right section of the PCB. Expansion slots include two PCI-e 3.0 x16 slots (x16/x8 electrical) and a PCI-e 3.0 x4 slot.

The ROG Maximus VIII Ranger is the most basic and entry level motherboard of the ROG lineup that comes with a 10 Phase PWM, powered by a single 8-Pin connector. This motherboard has two heatsinks covering the PWM that feature heatpipe based cooling design. Four DDR4 DIMMs are located on the board while expansion slots include three PCI-e 3.0 x16 (x16/x8/x8 electrical), two PCI-e 3.0 x1 and a single M.2 SSD slot. Storage includes 6 SATA III 6 GB/s ports. Internal I/O includes two USB 3.0 headers and a single USB 2.0 header. I/O includes 6 USB 3.0 connectors, USB 3.1 (Type-C) connector, 7.1 Channel audio jack, a LAN port and a few display connectors. These are all the details to know as far as the ROG Z170 motherboards are concerned. Do note that ASUS will have several other motherboards in the line such as their high-end Z170 Deluxe and Z170 Pro.