ASUS ROG lineup is getting a new entry and a glorious one in the form of the ROG Maximus VIII Formula board. The ROG Formula motherboards has seen eight iterations so far, each perfecting the previous design and using the latest PCH from Intel. The latest addition is aimed at Intel's Skylake generation of processors and uses the Z 170 series chipset while featuring its own list of addons. 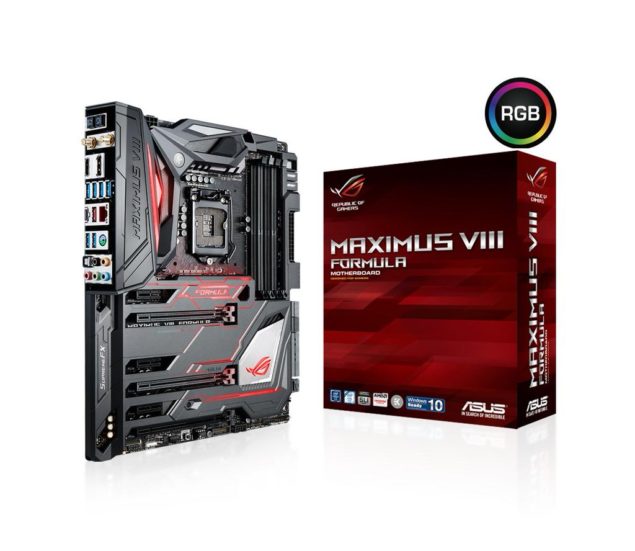 The ASUS ROG series is known for the red and black colors but almost every hardware manufacturer has went with this them on their gaming lineup which made ASUS switch to new design schemes. We have seen ASUS's ROG products using different color schemes, their ROG MATRIX series which includes the beefy ROG Maximus VIII Extreme Assembly and ROG MATRIX GTX 980 Ti Platinum use a new orange and black color scheme which looks great. The ROG series were the first to use the red and black color scheme but with the scheme getting more common among vendors, ASUS had to shift to new color schemes to differentiate their products from competitors. Their solution is a complete RGB overhaul to the ROG Maximus VIII Formula motherboard. The RGB LEDs are placed across the motherboard and can emit the colors of your choice for a more personalized customization experience.

The ROG Maximus VIII Formula features a great design from top-to-bottom. It comes with a charcoal black PCB and silver aluminum finish on the PCH heatsink. The whole PCB is covered by a protective shield that has been a part of the lineup since Maximus VI Formula. This cover is also known as the ROG Armor and a more sturdy built can be found on the Sabertooth series from ASUS. The ROG Armor has two parts, one of which is a strong ABS top cover that blocks the heat from graphics cards directly to achieve lower system temperature as well as DIYers can apply their own personal style to, and a fortifying SECC steel support behind the PCB to prevent the board from bending. It also ducts heat away from crucial components via thermal pads.

In terms of specifications, the motherboard features the LGA 1151 socket to support Intel's 6th generation of Skylake processors. The motherboard comes with a beefy VRM that is geared towards enthusiast overclockers. The CPU is powered by a 8-Pin connector while the board is juiced up through the 24-Pin ATX connector. The board features four DDR4 DIMM slots that can enable up to 64 GB of DRAM (System memory) with speeds that are rated beyond 3000 MHz. Expansion slots include three PCI-e 3.0 x16 (x16/x8/x8 electrical) and three PCI-e 3.0 x1 slots. For storage, we are looking at 8 SATA III (6 GB/s) ports, two SATA Express ports and a single NVMe SSD connector. There's also mSATA support on the board while Audio is provided through the SupremeFX 2015 chip that is a high-end audio solution that come with ESS ES9023P (DAC) with Hyperstream technology, ultra-low-jitter clock, Nichicon capacitors, 2VRMS headphone amp, and Sonic SenseAmp. 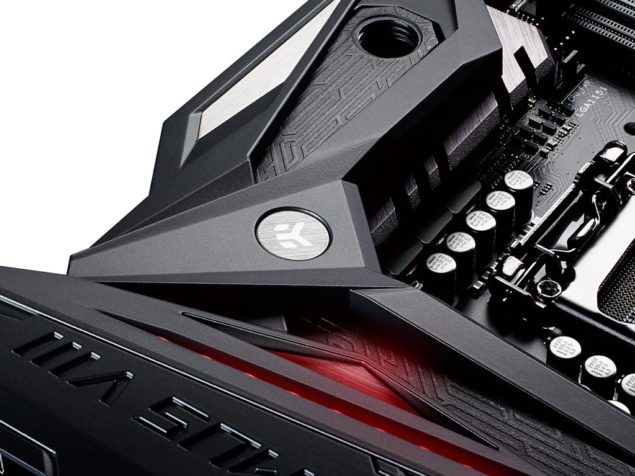 We will detail the I/O connectors in a bit because we have another major feature to tell you about the board. Over at the VRM/MOSFETs, we can spot a high-end heatsink design that uses hybrid cooling. We are looking at the latest iteration of the CrossChill cooling, only this time, ASUS collaborated with EK Water Blocks to design the hybrid cooling solution. EK Water Blocks are known for their expertise in building high-end water blocks for the PC market (graphics cards, motherboards and processors). Exact details for this block are not known but it definitely uses a copper base to transfer heat and knowing that it's built by EK, it's high-end from the start and that showcases the build quality of this board.

Last up, we have the I/O connectors which include 6 USB 3.0 ports, 1 x USB 3.1 Type-C port, LAN port, SPDIF, ROG Connect, Reset switch, WiFi antenna connectors, PS/2 port, 7.1 channel audio jack, HDMI and DP 1.2a ports for display connectors. The motherboard is suggested to hit retail relatively soon, we can expect to see the actual announcement around CES 2016. The motherboard is going to replace the MVIIF so we can expect pricing around $380 US.